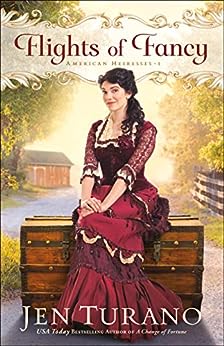 FLIGHTS of FANCY by JEN TURANO

There are so many good things to say about this book I'm not sure where to start. First I applaud the author with her delightful way to bring characters to life. She writes with a funny and subtle way that I find myself snickering at some of the characters while falling in love with them.

Let's begin with The Duke of Montrose and his uncanny ego. He is so sure of himself as a prize for any lady that he is shocked when Isadora doesn't jump into his arms and beg to be taken away to be his bride. Isadora has been brought up right and can certainly speak her mind when needed. The duke must be crazy to tell her to stop reading novels. I could hear a gasp as he says, " Novels are only suitable for the simpleminded and you would not care for anyone to believe you're simpleminded, would you?, " Now would be a good time to slap his face and walk away with grace. Isadora definitely puts him in his place with her very proper response. I love this spunky girl and know I am in for an adventure with her. Oh my the dance floor is where Isadora really shows the duke he is not in charge. Such great writing from the author I laughed so hard I cried.

The story is a grand adventure as Isadora has planned to run away and hide from the duke. There are rumors he may be desperate to do anything to have Isadora be his wife. Lets hope Isadora has thought everything out as she ventures off to become hidden from everything she knows. Is the duke dangerous? What horrible rumors of the duke would cause some to think he is capable of a crime? The story is filled with adventure and Isadora will find that " God occasionally throws obstacles our way so that we're forced to grow into the people He wants us to be." Let the journey begin.

Ian is a breath of fresh air compared to the duke. Will Isadora convince Ian to hire her so she can stay away from the dangers at home? As luck would have it, Isadora has found employment but it isn't exactly what she expected. She now has four children to look after, animals that run everywhere including inside the house and an uncle that could be a little strange.

The story is filled with laughter, characters who seek God in what he has planned for their lives, mysterious goings on at Ian's place and a blooming romance to capture the readers with a book that you will not be able to put down. Take a journey with Isadora as she seeks a new life and maybe happiness along the way.

I received a copy of this book from the author and Bethany House. The review is my own opinion.