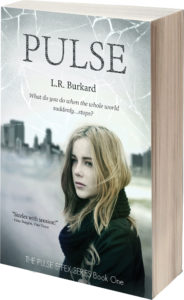 What do you do when the whole world stops?
Andrea, Lexie and Sarah are just ordinary teens until a mysterious event shuts down all technology. In the dead of winter, there’s no heat, no internet, no cell phones–not even a working car.
In this chilling Christian YA tale, most of the population doesn’t survive. Pitting faith and grit against a world without power, the girls and their families must beat the odds. But can they find the strength to survive when society collapses and technology fails? 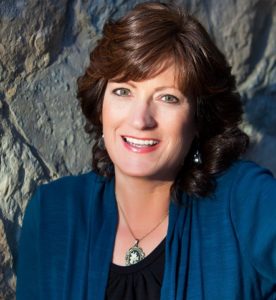 Linore Rose Burkard wrote a trilogy of genuine regency romances for the Christian market before there were any regencies for the Christian market. Published with Harvest House, her books opened the genre for the CBA. She also writes YA Suspense/Apocalyptic fiction as L.R. Burkard.Married with five children, Linore home-schools her youngest daughter, teaches workshops for writers, and is the Vice President of the Dayton Christian Scribes.  Her latest  PULSE EFFEX SERIES, takes readers into a “chilling possible future for America, while affirming the power of faith in the darkest of times.”

When my sweet historical romance series was published, I never dreamed my next would be YA/dystopian. What a switch in genres! So, how did I go from one end of the writing spectrum to another? Blame it on an idea that refused to die. I read a headline about how close the earth came to suffering a catastrophic electromagnetic pulse, or EMP, in 2012. We missed the worst effects of a solar flare by a hair (in space terms); but the “what if” factor had been set in motion. What if that flare hadn’t missed us? What if I was a teen raised on electronics–or an adult medically dependent on them–and it all went dead in a matter of seconds? What if the next flare doesn’t miss? PULSE, the first book in my PULSE EFFEX Series, was born.
The books shows life in the aftermath of such an event for three teens and their families. With the world plunged into a new dark age, can they keep hope alive?

Would you be prepared if am EMP happened? I know I'm not and I guess like most people I just don't think about it. When we have hurricane season the news is always giving us directions to get prepared if one was to come our way. I have done that since I have been through several hurricanes. But an EMP just doesn't seem as worrisome to me. That is my silly way of thinking that it could never happen. But in reality it could happen at anytime.

The book takes us on a journey with three different young girls and their families as they face the aftermath of an EMP. Everything is shut down including electricity, phones, stores and even basic needs like water. Each family deals with the crisis in different ways. One family who are very prepared have been stock piling food and essentials knowing that one day a disaster could happen. It was  interesting to read how desperate people became and were willing to kill for food.

There is one part in the book I had a very hard time with. The family is out of food and an offer comes their way to have shelter and all the food they need for a price. I won't spoil the story and tell you what the offer was, but I will say how disgusted I was reading it. Other parts of the story are a bit one sided and almost political to the point of becoming offensive to some people who disagree with statements made.

I did enjoy the book and getting to know the three girls and how they each found ways to survive. There is a faith element in the story but not too much that it is preachy.There is a lot of violence in the book which was a bit graphic at times.   I have to say it fit with the story because people will do anything to survive. I can't tell you what I would do if faced with this crisis but I know I would be doing a lot praying.

The author does not sugar coat anything and it made it realistic and almost scary at times. No one wants to think about the end coming, but as we see in the story, if you aren't prepared you could be scrambling for necessities that we take for granted. I may not agree with everything in the book but I will say that I thought it was interesting and made me want to get the next book in the series.

To celebrate her tour, Linore is giving away the grand prize of an eBook copy of her book and a $25 Amazon gift card!!
Be sure to comment on the blog stops for nine extra entries into the giveaway!
https://promosimple.com/ps/e683/pulse-celebration-tour-giveaway
Posted by Deana at 12:03 AM