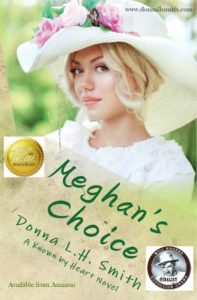 Meghan Gallagher complies with her father’s demand that she work on her own for a year by choosing to tutor eight children in a wild Kansas railroad town. But she had no idea just how wild it was until she was rescued by a local dance hall the day she arrived, and soon after hit by a stray bullet. In short order, she meets a dark, handsome cowboy and a wholesome, attractive doctor who both vie for her heart. As things heat up around town, Meghan’s love life catches fire as well. Is she scandalous to allow both men to court her at the same time? And—how close a relationship with God does Meghan want? Will she draw near?
Meghan’s Choice (pre-published) was named a semi-finalist in the 2014 Operation First Novel by Jerry B. Jenkins and an honorable mention for the Golden leaf Award in 2015. Since publication, Meghan’s Choice was a Selah Award finalist and also in the Will Rogers Medallion Award.
Published in connection with Hartline Literary Agency, serving the Christian book community. Visit us at www.hartlineliterary.com. 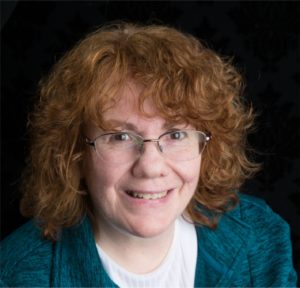 Donna L.H. Smith is a Kansas prairie girl transplanted to Lancaster County, PA. She is a graduate of Christian Writer’s Guild Craftsman program and holds two college degrees, both B.S. and M.A. in Mass Communication. She’s been married to a wonderful man named Kirby for thirty years. Her debut novel, Meghan’s Choice, made the finals of both the Selah and Will Rogers Medallion Awards. Rose’s Redemption, the sequel, was just released. She blogs, speaks at workshops and retreats and although she is at an age where many begin slowing down, she wouldn’t think of it. Recently, she took on the role of Managing Editor of Almost an Author.com, and serves as ACFW (American Christian Fiction Writers) Mid-Atlantic Zone Director. She is also a member of AWSA’s Protégé program (Advanced Writers & Speaker’s Association).

Back in 2012, I wrote “Zorro” stories for Fan Fiction. I had an awful lot of fun with them, and people seemed to really like them. So, the thought came, what could I write for ‘real?’ I contemplated, prayed, and after a couple weeks or so, an idea came floating across my brain.
“Gunfight at Hyde Park.” Huh? I thought about it, and realized it was an obscure history lesson from my hometown in Kansas. I had Google it to get the details. I thought, well, I’m not gonna write a Christian romance novel just about a series of gunfights that killed and wounded more people than the OK Corral.
But I did think that the beginning of the gunfights could be the climax of the story.
Now, who should my heroine be? And the hero?
I started with that and took Christian Writer’s Guild’s Craftsman and the novel was completed in 2013—but only published in late 2017.
I’m proud of Meghan’s Choice. Pre-published it made the semi-finals of the last Operation 1st Novel that CWG held and placed in a couple of smaller contests. Last year, it made the finals of the prestigious Selah Awards for published books through the BRMCWC, and the finals of the Will Rogers Medallion Award.
My hope is that you’ll enjoy reading it as much as I loved writing it.

I very much enjoyed reading this book. The story was light and full of wonderful characters. I enjoy reading about the late 1870's and how different it was starting a town. Meghan is a delightful character with a very proper upbringing. It was a challenge for her to go out on her own, but her father wanted her to mature and learn to be more independent. Can you imagine the thoughts running through her head as she takes her first steps into New Boston, Kansas? The sounds of gunfire can be heard and I had to laugh when she couldn't find anyone to bring her trunks to the boarding house till the following day. Meghan must have been taken aback a bit as she suddenly realized she was really on her own.

One of the things I liked about the story was reading about Meghan teaching the children in this town. She has her hands full with little space to teach and children of all ages. She seemed to thrive as a teacher and really connected with them. There was enough supplies for the children but I don't think all the parents were confident of her teaching ability.

She does find herself in a love triangle when the local doctor named Scott  and a cowboy named Duncan both fancy her. This part of the story was interesting and I picked my favorite and was cheering him on. Both men have good qualities but for some reason she questions why the Duncan takes her under a tree one Sunday to have church. Her upbringing has taught her that you must worship God in a church setting and she felt uncomfortable not being with others on Sunday. It made me think of how people go to church on Sunday and everyone assumes they must be Christians. In reality you can worship God anywhere and feel close to Him. Just because you carry a bible or attend church doesn't mean you are a christian. It gives food for thought how people perceive things and how we can get legalistic about a building. The author brings up a good subject that I thought was interesting. We all worship God in our own way and Meghan was experiencing something out of her comfort zone.

My favorite character was a young woman who was not exactly what we would call ladylike. Her story is heart breaking and I loved how Meghan reached out to her. This woman was desperate to have a friend and escape her past. I won't say much about her but it is definitely a reminder that we need to look past the sin and see them the way Jesus does.

The story is well written and has a wonderful theme of forgiveness, hope, redemption and a closer relationship with God. I loved Megan's journey to find independence and seek a real understanding of the bible. I wonder who Meghan chooses to be her husband? That is something you will need to find out on your own.

To celebrate her tour, Donna is giving away the grand prize of a copy of her book!!
Be sure to comment on the blog stops for nine extra entries into the giveaway! Click the link below to enter.
https://promosimple.com/ps/e5a3/meghan-s-choice-celebration-tour-giveaway
Posted by Deana at 12:01 AM