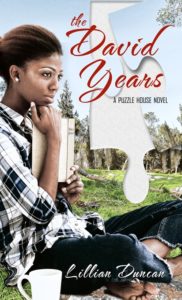 Nia looked at her aunt and asked, “So what am I ‘spose to do now?”
“Have you ever heard of King David from the Bible?”
“I guess.”
“There were a lot of years between the time David was anointed as the king and he actually became the king. It’s a time for you to grow in your relationship with God.”
“And then later I get to be king?” Nia giggled.
“I meant that figuratively not literally but these are your learning years–your David Years.”’
“My David Years. I like that.”
Nia Johnson has spent the past four years developing a closer relationship to God. She wants to believe she’s still anointed to become a healer at Puzzle House but as each year passes, she has more and more doubts.
Now that she’s graduated from high school and is an adult she is sure it’s time to take the mantle of healing Rachel passed to her so many years before. But the harder she tries, the more it eludes her. 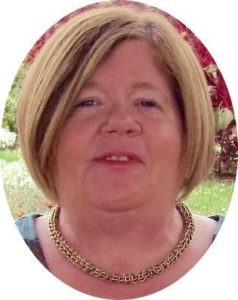 Lillian lives in a small town in Ohio with her husband. She writes the types of books she loves to read. Even though her books cross genres, they have one thing in common, faith-based stories that demonstrate God’s love—and lots of action. OK—that’s two things.
She was a school speech pathologist for over 30 years but retired in 2012 after being diagnosed with bilateral brain tumors due to Neurofibromatosis Type 2 (NF2), a rare genetic disease.
Whether as an educator, a writer, or a speech pathologist, she believes in the power of words to transform lives, especially God’s Word. To learn more about Lillian and her books, visit: www.lillian–duncan.com.

The David Years is the second novel in the Puzzle House series. In Puzzle House, Nia was anointed to become a healer. The David Years starts out where Puzzle House stopped.
Nia looked at her aunt and asked, “So what am I ‘spose to do now?”
“Have you ever heard of King David from the Bible? There were a lot of years between the time David was anointed as the king and he actually became the king. David was tested many times during those years. Those years were very important to David’s growth as a man so that he would be the king God wanted him to be when the time was right.”
“So what are you saying, Auntie?”
“I’m saying these are your David years.”
And so the story begins. Most of the book takes place after Nia’s high school graduation during her first year in college. She’s impatient to begin her time as healer and tries to make that happen in her timing—not God’s.
But God will not be rushed and whether Nia likes it or not, she’s still in her David Years—her learning years. I’m sure you’ve heard the saying, ‘we learn from our mistakes.’ Well, Nia learns a lot that year. In other words, she makes a lot of mistakes.
My college years are long, long past so I thought it might be hard to get into the mindset of a college student, but it really wasn’t. I thought back to all the mistakes I made during my college years and the story took off from there!
Even though Nia is a college student, her story will resonate for anybody who’s facing changes in their life, no matter the age. We all have learning years throughout our lifetime—our very own David Years.
Life changes whether we want it to or not. A new marriage. A baby. A divorce. A new job. Retirement. No matter what age we are, we all struggle with finding our place in the world, especially when life changes. The good news is that as Christians, we may not have all the answers, but we know where to find them.

This has been a real journey for me as I soaked up every word in this powerful story. Many of us have heard the story of David and how he became king. The author uses that story to illustrate how a young woman was following the path of David. I never really thought about the many years David waited to be king. It is something I just passed over in the bible but the author does an amazing job of  using David as an example that made many things clear to me.

For many of us we have been told we each have been given a gift to help spread the word about Jesus. I remember when I finally realized what my gift was. I was so excited that I wanted to jump in and not wait for His direction. I didn't wait for my David years because someone said they knew I was gifted as a teacher. I did learn a lesson about patience and getting rid of pride. It was a hard lesson, but one I needed.

Nia was very easy to relate to and I loved reading about her journey with God. It had been spoken over her that she had the gift of healing. What I really liked was how the author explained that healing took place not just physically, but emotionally and spiritually as well. Nia I think became overwhelmed with her gift and started to doubt God. I have been in that place recently myself. I have questioned over the last four months why God didn't heal my brother. I don't have an answer but I do know that God is still here right beside me. Nia gets mixed in with a group that said they believed in God, but was doing things that made Nia uncomfortable. I wanted to tell her to run as fast as she could from the group. There are many people who claim to follow the bible, but Nia was being deceived. Pay close attention to this part of the story because Nia will find out her David years are not quite over. She will have to really depend on God's direction, before she gets trapped into something that will become a false gift not used  for God's purpose.

The book has so many wonderful characters and each one goes through difficult times  as they question if God is real. I appreciate the author talking about having an intimate relationship with someone and the consequences they faced. My heart broke as I read how hard it was to watch this person slip away into darkness that lead to drugs.

Tanya was a character that I found to be very realistic and loved how she wasn't sure about Nia. She called her a "Jesus Freak " many times in the story. She was nervous around Nia. I think because she knew she was making wrong choices but didn't want to face them. Tanya's party days catch up with her and the one person she knew would help her was Nia. I really liked how Nia was compassionate and helped Tanya get help.

I can't forget to mention Bart. He was a genuine nice guy who really liked Nia. Their relationship seems to being strong until a tragedy strikes Bart. The reason I liked this part so much was because even though Bart was a strong Christian and was even going to become a pastor, he became angry at God. He started to lose faith and couldn't understand why God would take away someone he loved. Where was the God that healed? He wanted to give up and pushed everyone away. This part of the story is very important.  This is really when I started to  understand David and the years he waited patiently. He went through tests and I believe Bart was being tested as well.

I am very impressed with this book and I didn't want it to end. I think this book should be a requirement for all leaders in a church and college students going through theology. Leaders need to be reminded that it isn't their power that heals, or their prayers that cause miracles. It is through God these happen. We are a vessel for Him, but He is the healer.

" One thing you need to know is that sometimes God chooses to heal us physically, and sometimes  He doesn't, but He will always -always heal us spiritualy."

I believe that statement 100 percent. Right before my brother died, I had to make sure He knew Jesus and was going to heaven. I led him in the sinners prayer and at the end my brother cried. I felt him finally at peace. He was saved and I knew where he was going.

To celebrate her tour, Lillian is giving away a grand prize of a $25 Amazon gift card and the choice of one of her eBooks!!
Be sure to comment on the blog stops for nine extra entries into the giveaway! Click the link below to enter. https://promosimple.com/ps/e57c/the-david-years-celebration-tour-giveaway
Posted by Deana at 2:03 AM