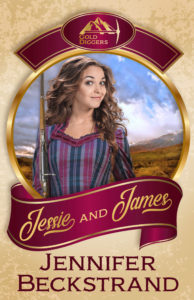 Jessie Madsen has her hands full helping her parents run their small farm and boarding house while every fortune-seeker in the country seems to be flocking to her small town in search of gold. It’s bad enough that claim jumpers won’t quit trespassing on her property, but geologist James Kelsey, mildly intriguing and surprisingly handsome for an Easterner, seems more interested in her than the mining business. Jessie is certain she doesn’t have the time or the need for a man, and after getting her heart broken, she has resolved never to fall for an outsider again. Add stolen cash, a fast-talking con man, and a pair of bandits, and Jessie is indeed up to her eyeballs in trouble. Will she soften her rock-hard exterior and let the geologist discover the hidden treasure in her heart? 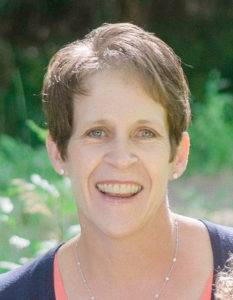 Jennifer Beckstrand is the two-time RITA-nominated, #1 Amazon bestselling Amish romance author of The Matchmakers of Huckleberry Hillseries, The Honeybee Sistersseries, and The Petersheim Brothersseries for Kensington Books. Huckleberry Summer and Home on Huckleberry Hill were both nominated for the coveted RITA® Award from Romance Writers of America. Jennifer has always been drawn to the strong faith and the enduring family ties of the Plain people and loves writing about the antics of Anna and Felty Helmuth, the Honeybee sisters’ aendiBitsy, and Alfie and Benji Petersheim. Jennifer has written twenty-one Amish romances, a historical Western, and the nonfiction book, Big Ideas. She and her husband have been married for thirty-four years, and she has six children and seven adorable grandchildren, whom she spoils rotten.

Jessie and James is my first published Western historical novel, and I couldn’t be more excited. The first book I ever wrote was a historical Western, and I’ve been wanting to write another one for ten years. (That first Western is still hanging around my house somewhere. I might decide to publish it next. J) For my research, I traveled to a real mining town about two hours from my house. Yes, it really is named Eureka, and it was a boomtown in the 1880s, the period in which my book is set. I met an old-timer in Eureka who told me some fascinating stories about mining then and now.
Did you know that you may own the ground your house sits on, but you only own it to sixty feet deep? So a mining company can come in and dig a mine right under your house, and it’s perfectly legal. Many mines were dug straight down or in any direction that would get them to ore faster. In the 1880s in Eureka, often they’d dig straight down using only picks, shovels, and dynamite. A plumb bob was utilized to make sure their tunnels were straight up and down. They usually dug down 600 feet then drifted horizontally a couple hundred feet, then dug down again. Some mines went deeper than 1800 feet. Nowadays, there aren’t many mines that deep. They’re more dangerous, so they’re too expensive to insure.
In Jessie and James, James is an ex-cowboy turned geologist looking for gold. Jessie is a feisty, independent woman who runs a boarding house with her parents and thinks Eureka needs a little more fire-and-brimstone preaching to keep the incorrigible miners in line. Jessie doesn’t want anything to do with a gold digger, and she’s willing to use her shotgun to run James off. But James doesn’t scare that easy, especially when the woman on the other end of that shotgun might turn out to be the love of his life.
Jessie and James is full of shotguns, bandits, and heart-stopping romance. Don’t miss it!

This has been such a wonderful story to read. The author delivers a strong female character named Jessie. I loved everything about her. She is fierce, protective and has a heart of gold. Losing her mother was hard for her, but I think she has become closer to her dad and step mother as she deals with the loss. The way Jessie takes cares of the place is amazing. There is no way I could chop wood, take care of animals, go to the mercantile and never rest till all the chores have been completed. What I liked most about her is that she never complains about her chores and is willing to help her father out anyway she can.

The way James is introduced into the story is priceless. He tries to do a gentlemanly thing and it literally almost blows up in his face. Jessie is not keen on men helping her or coming to her aid . James makes a huge mistake in trying to hep her and well you must read how it turns out. I laughed when Jessie finds out that James is staying at the boardinghouse she happens to help run. Oh this is going to be such a journey for these two.

I love how the author describes the way Jessie felt when her father married Alice so quickly after her mother died. She describes it as ," Like someone digging my heart out of my chest with a spoon."  It is a perfect way to describe the pain she was feeling. I felt that way when my dad married six months after my mom died. It hurt so much that I couldn't believe he would disrespect my mother like that. Jessie seems to understand that her father remarried because he wanted Jessie to have a mother and he was hurting for companionship.

I loved how the story was about mining for gold and other things that could be found to make people rich. I understand how Jessie feels about mining by how much it affected her father's health. Will James be able to convince Jessie that he really is a good guy? I love the faith James has  and how much he keeps his word about things. He is just what Jessie needs to let her guard down and learn to trust someone.

It is evident that the author has does research about mining. The details make you feel like you are mining for gold with others around you. They have expectations in their eyes as they dream of getting rich. It can be a dangerous task as mines can collapse and trap people with little hope of getting out. I was very intrigued as the story progressed. I wanted James to reassure Jessie that what he was doing would be safe and her land would not be disturbed. Mining for gold does bring men from all across the states. They have dollars signs dancing in  their eyes. For some, they have no respect for safety and push forward as danger gets close to them.

It was very hard to put the book down and I loved being back in the western days where gold miners were everywhere, men were out to get rich and action takes center stage. Jessie has been deeply hurt in the past and finds it hard to trust James. The action in the story is one you would see in the movies. Men trying to steal money, putting Jessie's life in danger and James ready to do what he needs to rescue Jessie and the money.  The author writes a story that not only has a bit of romance, sneaky men who will do anything to stake a claim and a lesson in forgiveness, letting go of the past  and most of all learning to depend and trust God.

To celebrate her tour, Jennifer is giving away a $10 Amazon gift card to two winners!!
Be sure to comment on the blog stops for nine extra entries into the giveaway! Click the link below to enter. https://promosimple.com/ps/e57b/jessie-and-james-celebration-tour-giveaway
Posted by Deana at 1:50 AM