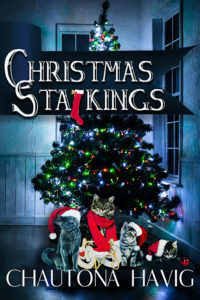 If her life had to transform into a TV movie, couldn’t it have been a sweet romance instead of a creepy suspense?

Wendy Nabity has redefined “crazy cat lady,” and she’s just fine with that. She’s got a tree and a stocking for reach of them, too.

All that festivity turns ominous when things begin turning up in odd places—places her fur babies couldn’t move them. The local police? They think she’s as crazy as the fleas jumping from cat to cat—or something like that.

Her neighbors aren’t much help. The nice one won’t come near her, despite his obvious interest, and the other hates her enough to torment her every chance he can. Seriously, if Neal Kirkpatrick makes one more rude demand of her, she might just start dumping the litter box on his front porch!

However, when a threatening note appears in one of the stockings, even Fairbury’s police officers have to admit no cat could have written it, and one officer takes it upon himself to do something.

Who knew Christmastime could feel so sinister? 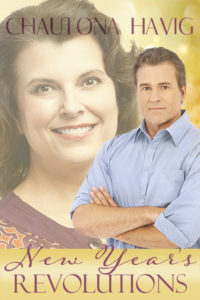 His life is spinning out of control, and his heart isn’t far behind!

Neal Kirkpatrick: project manager, staunch atheist, and town grump. Aside from an apparent soft spot for a neighborhood boy, the man has nothing to recommend him.

So when he overhears criticism from a neighbor he secretly respects, Neal decides maybe it’s time for professional help. With the same straightforward tenacity he uses in his job, Neal goes on a hunt for a therapist to help him unravel the mystery of himself.

His therapist says he’s in love, but Neal Kirkpatrick does not do relationships.

Is any woman worth changing his entire life for?

Is He worth it?

You met him in Christmas Stalkings. Now it’s time to get to know him.

Discover what happens when the town curmudgeon steps out of his comfort zone and into a psychologist’s office to learn what’s up with his heart.

I met him in my book, A Bird Died. Neal Kirkpatrick. Grumpy, snappish, the man just seemed to look for something to grouse about. Except when it comes to a little boy in the town, and then a soft side came out that no one expected.

A few years later, I got the idea for a Christmas comedic suspense “noella” (Christmas novella), and the minute I knew what I wanted to write, I knew I’d be writing about him, too. He’d be the main character’s neighbor and always on her case about something. Instant conflict and subplot. Oh, yeah!

Something unexpected happened as I wrote the story, though. I fell in love with the cranky guy and didn’t want to let him go. Did I have time to write a book for New Year’s, too? I mean, how cool would that be? After much deliberation, I decided to go for it.

I’m kind of glad I didn’t know what kind of Christmas our family would have that year or I would never have decided to do it, and I doubt Neal’s story would still be languishing in the slush-pile of my mind (for the story of our family’s Christmas that year, you might want to check out Sand & Mistletoe).

That story turned into something unexpected.

First, there was more to his story than I’d ever imagined. A dysfunctional family, a past that he didn’t even choose himself, and a rather immoral life I wouldn’t usually care to consider. But reality made me admit that a man with no concern for what the Lord says about things wouldn’t necessarily live the kind of life I think people should! Don’t worry, I didn’t do deep into those kinds of details! My prudish streak got pushed, but not pushed aside.

More than just “his side of the story,” New Year’s Revolutions tells the story of a man who sees himself through the lens of someone he respects and goes on a journey to see why he is as he is and if there is something inherently wrong with it or if the trouble lies with others (as he suspects).

Both a personal and a spiritual journey ensued that made me dig deep into Scripture to discover what it had to say about Jesus, relationships, and honesty. Neal’s discovery of what the Word says about things drove me to study and restudy things that I believed. We didn’t always come to the same conclusions, but it was interesting and I learned more than I would have expected to.

I hope you love Neal as much as I do. I know one thing for sure… this isn’t the last we’ll see of him.

Oh what a fun book to read to brighten my holiday spirit. I loved Wendy and all her cats. I could see me doing the same thing but with dogs. Her love of cats is adorable and she treats them with special care. What a treat it would be to visit her home and find Cupid, Dancer, Vixen and well you get the idea. Every Christmas she decorates a tree for each cat. Now it’s not a simple tree she does  but rather a special theme for each cat. That’s right. Every cat gets their own special tree.

She is lonely though and has high hopes her neighbor will ask her out. Now she has two eligible men in the neighborhood but one is down right cranky, demanding and a Scrooge. I loved the mystery surrounding who was getting into Wendy’s house and moving things around. The things she goes through to keep her cats safe is like a scene from “I Love Lucy.” The police think she is nuts and half the town tries to avoid her. Something strange is going on and Wendy is determined to get to the bottom of it.

The story is quirky but oh so enjoyable. I really was thinking I had the culprit figured out but the author fooled me completely. There is a faith element in the story that I liked and loved how it tied into someone wanting to know more about Jesus. I can’t say anything more but this is a must read for everyone looking for a shining star in the midst of chaos.

In this book we get to know Neal on a deeper level. I did like how the author shows him as a confused but kind man. He really does mean well when he says things to Wendy. It’s the way he says it that is easily misunderstood. He can sound abrasive at times and other times almost sincere. Being Wendy’s neighbor is like a roller coaster ride. That woman is always forgetting things, has a lot of cats and a stalker to complete the story.

I really liked the sessions Neal  had  and how he slowly became aware of his feelings. I thought it was very brave for Neal to decide to step out of his comfort zone and seek help. The author does write a more emotional journey as she peels away the surface and opens Neal up as a vulnerable person. Will he win Wendy over? Can she get past his unusual way of expressing himself to see the compassionate Neal?

Because I said so — and other adventures in Parenting, December 14

To celebrate her tour, Chautona is giving away the grand prize package of a $25 Amazon gift card and a paperback copy of each book, Christmas Stalkings & New Year’s Revolutions!!