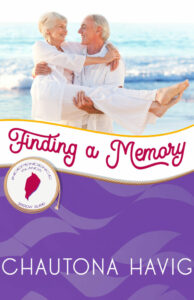 He loved her then. Will she love him now?

When Mallory Barrows finds an old diary in a box of books, the story she finds within sends her on the hunt for the owner–and maybe more.

Theirs is a story ripped from a country song. A wedding, a former love presumed dead, her new love stepping aside. And over forty years later, their story is one few remember.

With Mallory determined to find the people in the pages of that diary, one couple is offered the second chance of a lifetime.

This “second-chance / seasoned romance” novel introduces the next island in the Independence Islands Series featuring five islands, six authors, and a boatload of happily-ever-afters.

I was a weird child. While my friends were listening to… whatever 80s kids listened to, the enormous console in my bedroom played The Brothers Four, The Kingston Trio, Roger Miller, Billy Vaughn, Patsy Cline, and Patti Paige.  One minute I was a “Rovin’ Gambler” and the next I was “Chug-a-lugging.”  Hmmm… In hindsight, one could say I listened to some dubious music. Drinking, gambling… Oh, that reminds me of another one. The Sons of the Pioneers.  “Cigarettes, Whiskey, and Wild, Wild Women. (Hint: they’ll drive you crazy. They’ll drive you insane.  The song says so).

But there were other songs—beautiful ones.  “Greenfields.” “Little Green Apples.” “You Belong to Me.”  And of course… “Go on with the Wedding.”

If you’ve never heard it, you should listen. HERE.

That one used to tear me apart.  I never could decide which man she should have chosen.  I’m a sucker for the underdog—for a hero.  So, I always said Fred.  And I meant it. Right up to the moment I thought about Jim being away, fighting, finally making it home to his girl only to see her marry someone else.  How horrible is that?

Well, one of the tropes I chose for my books in the Independence Islands was going to be a “second chance romance.” I also wanted a “seasoned romance,” so this song came to mind. And then I had my story.  It’s not the one my twelve-year-old self would have wanted.  Truthfully, it’s not the story I wanted to write today, but it’s the right one. It’s probably my favorite of all of the ones I’ve done in this series.  I hope you’ll love Frank and Patti as much as I do.

All that’s left now is for me to write one more story—the one that has been forming through each book. It’s time for Mallory and Benjamin to both learn and write their story’s end (which of course, is only a beginning).

Well Chautona you have finally done it. You have written one of the best books I have ever read. There are many stories out there about second chances and forgiveness. What sets this book apart from others is the characters who not only express their weaknesses but they address them with realistic emotions. My heart broke as the story unfolds into this long ago relationship that never quite got  a chance to blossom.

There are a few characters I want to focus on because they defined the story for me. Patti’s life has been filled with pain, abuse, regrets and anger. Marrying the man she did was more out of a sense of honoring her word. Patti tries so hard to make the marriage work, but she had no idea that her husband was dealing with PTSD. It was during the Vietnam war that he served and no one really understood the physiological effects it had on those who served at that time. It would be easy  to be angry at Jon for the abuse he inflicted on his family, but the author made me look deeper into his character. Yes I was angry at what he did, but I also wanted him to get help and realize that he needed to change his life. Somehow I felt sorrow for him as his life exploded around  him. Maybe he thought that he was unworthy to be loved and gave up. The author deals with PTSD with understanding and shows that it affects everyone in different ways.

One of the most emotional parts of the book is when Patti cries out and expresses her anger towards God. Why did He allow her to go through so much pain during her marriage? Perhaps in our moments of why me, we should be asking “what message  are you teaching me God? So many years passed and she still found her heart yearning for someone she never forgot. It is time to get the tissues ready because here comes the part where I start to break down in tears.

I think my favorite character in the entire story is a woman who loved her husband knowing that he loved another woman. I admire how she gave grace to a man who still hopes someday to rekindle a relationship with another woman. Their marriage is good and Frank did love Gina but he couldn’t give his full heart to her. I cried as I realized the sacrifice Gina made as a wife. She loved her husband and was willing to share his emotional bond with someone from his past. How many of us could do that? I don’t think I could. Her character taught me how to be kind, gentle and forgiving.

Mallory is the one who finds a diary that sets off years of old memories for two people. Her determination to solve the mystery of who the diary belongs to opens the door for a beautiful journey through years where hope and second chances can happen no matter how old you are. The ending is both joyful and a bit of a cliffhanger. I can’t wait to see where  Mallory and Benjamin’s story goes.

She Lives to Read, February 28

Because I said so — and other adventures in Parenting, March 8 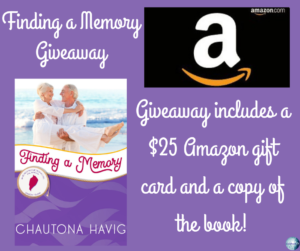 To celebrate her tour, Chautona is giving away the grand prize package of a $25 Amazon gift card and a copy of the book!!