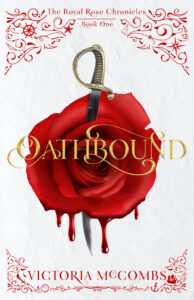 Beware the waters. The dangerous deep brings ruin to all.

Emme has spent her life avoiding anything to do with pirates. But the fates are cruel, and now a hidden sickness leads her to partner with pirates for the one thing that can save her—a cure on an island none are certain exists.

The pirate captain’s secrets are darker than the deep and threaten to kill them all. His obligations are tinged with betrayal, for his oathbind must be fulfilled. To ignore it is to invite peril of unimaginable destruction.+

As the adventure unfolds, the sea takes more than she expects and the sea gives more than he wants. 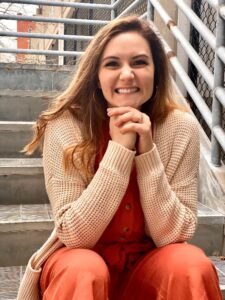 Victoria McCombs is the author of The Storyteller’s Series from Parliament House Press, and Oathbound. She writes young adult fantasy and adores stories about treacherous pirates and traitorous princes. Her favorite things include peppermint hot chocolate, peanut butter ice cream, game nights with family, and Jesus. She has her mom to thank for allowing so many medieval weapons inside the house as she was growing up, which curated her love for that time period. She is a mom of three little boys and a wife to the handsomest accountant there is. Together they live in Omaha, Nebraska.

Oathbound was my quarantine book. I remember getting the idea and thinking “I don’t know of any other pirate books in the YA fantasy genre.” Of course, after that, I saw them everywhere, and several amazing ones have come out since. But theses broken pirates had grabbed my attention and I couldn’t let go.

One aspect of my book makes it unique, and that comes in our main character. My characters are a reflection of me, but none more so than Emme. We see early on that she is sick, and while the disease is made up for the book, it’s mirrored exactly by the disease that runs in my family called ataxia. This is a disease that impairs every part of life before it ends it too soon. I’ve never opened those emotions so fully to put them on a page, but Emme and I were going through this together. While I’m lucky not to have symptoms yet (and the chance to never have to go through it), this disability is something I understand deeply, and I’m honored to bring it to life on the page to show the strength that can lie within even when our bodies fail us.

I hope you all enjoy Oathbound!

This story  is listed as a Young Adult but as an older adult I absolutely loved it. It was easy to get lost in the story as the  author takes readers across the seas. Pirates  are plentiful and danger lurks near as the ship sails to an island known for treasure, healing plants and death. I was on that ship with Emme and stayed by her side as her nightmares became more frequently. Having a mother who was feared by many only makes her more sure she can complete  her own mission. Now what would it be like to have a mother who was a famous pirate? It was very interesting to read about Emme’s illness. Slowly she could feel her body start to give out and getting to this island proved more important minute by minute. Would there be something on the island that could cure her?

Arn was impulsive, over confident at times and infatuated by Emme. It made  me laugh when he was able to convince Emme to join him at sea. He has asked her so many times he has probably lost count. Now that she is aboard she is proven to be more like her mother than she wants to admit. Arn has his own reasons for the  trip which he desperately wants to hide from Emme. I really was rooting for him. I like the underdog and Arn sure had a big battle ahead of him.

With a strange ship and monsters in the  sea the author delivers an adventure that quenches the thirst of those who love all things pirate and mermaids. There is a part in the book where black magic is displayed so some may find this uncomfortable to read. For me it was more of a sinister evvil lurking in the  water to distract those who want to overcome their fears. I found the talk about oathbound or oathbinding  curious. It reminds me of not being yoked to an unbeliever. The story cautions characters to be careful who they pledge to.

As the ending draws near, the author surrounds us with a edge of your seat adventure that I was intrigued by. There are many surprises in the story which enhances the authors ability to capture an audience with characters that hunger for treasure, power and revenge. The book is filled with ruthless people who will do anything for wealth. Deceit slivers across the pages as a battle breaks out on the island. Will Arn and his mates get the treasure? Can Emme find a cure for her illness in time? These answers await those ready to set sail on the seas where pirates dare to go.

For Him and My Family, March 4

By the Book, March 4

Labor Not in Vain, March 8

Because I said so — and other adventures in Parenting, March 9

Inside the Wong Mind, March 10

Through the Fire Blogs, March 12

To celebrate her tour, Victoria is giving away the grand prize package of a $50 Amazon gift card and a copy of the book!!