Book: Song of the Rockies 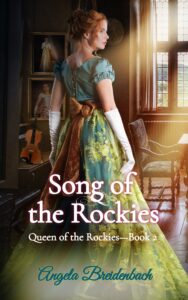 1890, Helena MT Song of the Rockies is the story of a sweet music teacher and eleven boys given one chance or else! Evan Russell lost everything—his ranch, his wife, and now, after trusting relatives with his young son, even the little boy is missing. How can a beautiful symphony of the heart come from such chaos?

Mirielle Sheehan, a music teacher at an exclusive boys’ school, believes scholarships for disadvantaged boys will solve the plight of hopeless homeless children. Mirielle’s challenge is to turn eleven street ruffians of various ages into stellar, disciplined boys with a future. Most think guttersnipes like this should be sold into indenture to learn a trade or pressed into the military. Get those miscreants off the streets!

Evan Russell, new mining millionaire, lost everything in the disastrous winter of 1886. Then his wife died leaving him with a son. Relatives in Helena offer a safe home for the child while Evan must find work in the mines. When he returns, he’s devastated to learn the entire family perished in a fire, and his son has never been found. Though he gained a fortune, he’s lost everything he valued! Romantic, sweet adventure set in picturesque Helena, Montana written by a bestselling author who is also a professional genealogist. 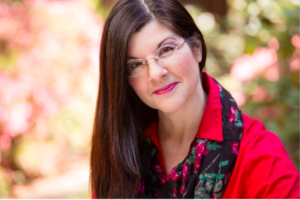 Angela Breidenbach is a professional genealogist, media personality, bestselling author, and screenwriter. She’s also the Christian Authors Network president. Angie lives in Montana with her hubby and Muse, a trained fe-lion, who shakes hands, rolls over, and jumps through a hoop. Surprisingly, Angie can also. Catch her show and podcast, Genealogy Publishing Coach!

Song of the Rockies idea came from the need to continue deepen the experience from Queen of the Rockies to share more about the orphaned children on the streets of Helena MT in the late 1800s. A lot of readers asked a lot of questions that kept me fired up and involved in the story. That led to the full six-book series because I just couldn’t stop once the first book sparked all the curiosity.

The people of Montana are very civic-minded, committed to volunteerism, and helping those who can’t help themselves. And that’s the modern society. But that kind of a “personality” of a place doesn’t come from a void. The people of Montana have a reputation of being intensely independent. But the heart of the people isn’t about independence, that’s just the way we are because life here is spread out and requires a lot of individual effort to survive and thrive. The result of such a spread-out population is the opposite of intense independence—devout and loyal support of one another. So, though Montanans are independent, we’re also fiercely supportive.

An ironic history tidbit I ran into on my research for this series, but couldn’t use, was the famous Thomas Meagher who was originally from Ireland. We have a massive, gorgeous statue of him on his horse in front of the Montana State Capital Building in Helena because of his contributions toward Montana becoming a state. He was educated in Ireland by the Jesuits and then in England. He spent time in France as well. His last name is pronounced like the planet, “Mar”. The irony is that Thomas Meagher escaped from imprisonment in Australia, banished there by the British for crime of sedition. He believed in Irish independence. Thomas was a hero to the Irish independent movement, a Civil War hero who flipped from supporting the Confederate South to the Union when the Catholic Church put their support behind the North, and after a successful military career he moved to Montana. Evidently, he put all those skills to good use as Montana became a state. But he was also a well-known scoundrel whose stories didn’t always add up. He met his end in a murky manner, well that’s what they say… Thomas was purportedly drinking and playing cards on a paddle boat up the Missouri River near Fort Benton. Somehow, though he was supposedly a good swimmer, he managed to fall overboard and drowned. Was he drunk? Was he cheating and murdered? Did he run into those he’d flipped on during the war? Was he pushed over? He did have a bad knee… No one knows. His body was never found. Hmm… We have a bar/pub in Missoula called the The Meagher Bar that serves delicious Irish fare. So, if you visit Montana, please don’t ask for the “Meeger” Bar, not a soul will understand what you’re looking for. But now, you know how to pronounce his name.

This second book in the series is short but packed with adventure and a sweet romance. Mirielle is such a wonderful character. Her heart overflows with love for  the young boys were are fending for themselves in the streets. Some people in the town  are not happy with the orphans running around but Mirielle is determined to help them find shelter and a place to call home.

The story moves very quickly and Mirielle finds herself falling in love with a man she doesn’t really know well. I thought this was a little abrupt that Evan and Mirielle develop a relationship so quickly. The story line with him trying to find his lost son is an added bonus to the story. It does have a good lesson on helping others that makes the book fun to read. I quickly fell in love with one special boy who others looked up to as their leader. Even though they each are independent, they long  for a forever home. I did enjoy seeing some of the characters from the first  book in this story and getting to visit the beautiful state of Montana. I look forward to the next book in the series as we continue our journey with characters that become like family.

For Him and My Family, February 20

To celebrate her tour, Angela is giving away the grand prize 20-minute genealogy consultation to a winner via Zoom!!