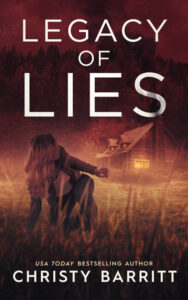 The justice system failed her family—and so did her hometown.

Madison Colson knows deep down that her father—a convicted serial killer—is innocent. But believing it and proving it are two entirely different things. Unable to help her father, Madison has spent most of her adult life overcompensating by helping others. When her aunt dies unexpectedly, duty calls her back to Fog Lake, Tennessee, a beautiful but painful place she’d rather forget.

Terrifying events begin to unfold once she arrives, unleashing her worst nightmares. The Good Samaritan Killer—or a copycat—is back, and now Madison Colson is his target.

FBI Special Agent Shane Townsend is determined to stop the deadly rampage that has sent the tightknit community into a frenzy. But he needs to earn Madison’s trust first. The task feels impossible, especially considering his father is the one who put her dad in prison.

With the whole town on edge and pointing fingers, tension escalates out of control. Madison and Shane must sort the facts from the lies—and fight for a legacy of truth—before The Good Samaritan Killer has the final say. 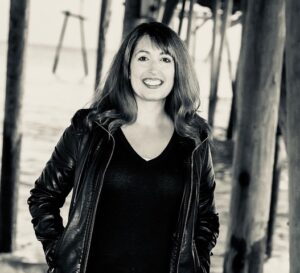 A USA Today and Publishers Weekly best-seller, Christy writes both mystery and romantic suspense novels that are clean with underlying messages of faith. Her books have sold more than three million copies, one has been made into a TV movie, and another is being developed for a TV series.

Christy’s books have won the Daphne du Maurier Award for Excellence in Suspense and Mystery, have been twice nominated for the Romantic Times Reviewers Choice Award, and have finaled for both a Carol Award and Foreword Magazine’s Book of the Year.

She’s married to her prince charming, a man who thinks she’s hilarious–but only when she’s not trying to be. Christy’s a self-proclaimed klutz, an avid music lover who’s known for spontaneously bursting into song, and a road trip aficionado.

Christy currently splits her time between the Virginia suburbs and Hatteras Island, North Carolina. She loves spending time with her husband, her two sons, and her four dogs.

I wrote Legacy of Lies after watching an interview on TV of a woman whose father killed several people. I tried to put myself in her shoes. How did she cope under the weight of what her father had done? How did people treat her differently? How did her father’s decisions affect her future? From there, I had the idea to highlight a group of three siblings who were dealing with this. I’d already done another four-book series in the mountain town of Fog Lake, Tennessee, and I really loved setting those books there. I decided to revisit the area and make it the place where these three siblings had grown up—and where they had to return.

I like books that are suspenseful without being graphic. This author is one of my favorites when it comes to clean mystery stories. She has a knack for having  her stories  move  at a good pace while keeping you on the edge of your seat. It is time to settle in for a night of suspense, secrets, list of suspects and an expertly written book that will send shivers down your spine.

I can’t imagine being in a family where your father has been convicted of murder and labeled the Good Samaritan Killer.  Madison has never believed that her father was guilty but the town does. Coming back to town to bury her aunt brings a host of emotions for her. I liked learning about her past and how awful her aunt was to her and her brothers. Wanting to do the right thing, she reaches out to her brothers to plan the funeral for her aunt. I think just being back in town gave Madison the creeps and she had good reason to feel that way.

When unexplained videos start surfacing again that closely resemble the pattern of the Good Samaritan Killer, FBI Special Agent Shane steps in to investigate. Seeing Madison on the latest video brings chaos to the town. Why is someone after her and why are they copying another killer? Shane is not sure who to believe the more involved he gets into the case.

The story is filled with twists that had me guessing till the end. I wasn’t quite sure if Madison’s dad is guilty but there are  enough unexplained incidents that made me wonder. I liked how Madison was able to reconnect with her two brothers and try to mend their relationship. Doubt starts to shine a light on one of the brothers when unexplained items are found in his home. Can you imagine the terror Madison feels as she starts to think that her brother is guilty of murder?

The ending is very good and leads to a very unexpected suspect. It’s a race to save Madison as a video shows up with her in dire need of help. Will she be rescued in time?  The author leaves us with a cliffhanger and I am excited to continue this story in the next book.

For Him and My Family, March 21

Because I said so — and other adventures in Parenting, March 28

To celebrate her tour, Christy is giving away the grand prize package of a $100 Amazon gift card and copy of the book!!