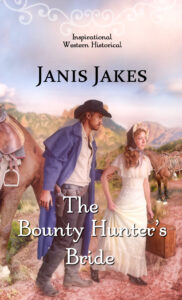 Bounty hunter Luke Lancaster brings the best of both worlds to his work—the tracking skills of his Comanche father and the marksmanship he learned from his missionary grandfather.

When Luke is hired to track down a young man wanted for murder, he assumes it’s a routine capture, but he’s taken on a wild ride when he discovers that the accused is actually an innocent school teacher who knows too much for her own good.

Determined to uncover the truth, Luke sets out to keep himself and Billie alive while bringing the real outlaws to justice. As they race across Texas, Luke falls more in love with Billie. But could a schoolteacher ever want a half-Comanche bounty hunter? Does Luke stand a chance or is he just her ride to freedom? 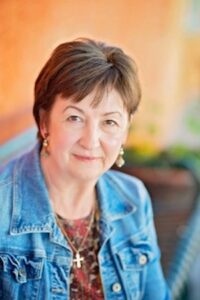 Janis Jakes encourages women through inspirational fiction and non-fiction. She is a Texas native with a penchant for winding country roads, faded jeans, street tacos, and fiery West Texas sunsets.

It wasn’t unusual to find dime-store western novels on my grandfather’s nightstand. As a young girl, I poured through the yellowed, dog-eared pages. There was just something about the characters—resilient women, courageous men, and hardened outlaws—combined with the rugged terrain and inevitable showdown—that drew me deeper into every story.

In writing The Bounty Hunter’s Bride I wanted to capture the western element while creating faith-filled characters facing an uncertain future. Billie and Luke confront relentless peril with true western grit—finding victory over past regret and love as big as the Texas sky.

Hidden Facts: Billie is named for my mother, who passed away unexpectedly when I was still in high school; she was in her late thirties. The boy’s ranch idea came from a Christian boy’s ranch less than ten miles from my home. And, the early scenery depicted in the story is from my neck of the woods and the land I adore—West Texas.

I remember my dad always sitting in front of the television on Saturday watching Western shows. He enjoyed them a lot and sometimes I would sneak a peek to see what kept his attention.  There was usually a bad guy who was on the run and lots of adventure and Native Americans scattered across the country side.The horses were pretty and in the end the good guy usually won.

This story follows that theme pretty well except for a few very important details. The person running from the law is a female which I liked getting to know.  Billie is desperate to get away from the posse who is after her. How did a teacher suddenly become wanted? Her character is a fighter and the author lets us see how determined she is to prove her innocence.

Luke is sent out by his company to apprehend the fugitive that killed a man and stole gold. He is sure he has stumbled on the right person until he discovers that it is a woman. The description that was given to him never said it was a female so he was shocked when he discovered Billie. When the two are ambushed Billie ends up shot. Luke can’t just leave her there to die so the honorable thing to do is take her to get help. It was interesting that he chose his sister’s place to go not knowing  if Billie was dangerous or not. Did he leave a dangerous criminal at his sister’s house?

The story is a look at a woman trying  to prove her innocence and a man who needs to forgive God. Their journey is emotional as they face danger and seek answers to overcome their past. It’s interesting that they both are dealing with something they feel responsible for. Guilt can cause people not to trust and turn away from  God. I liked how the author included a look at how forgiveness helps relationships mend.

Of Blades and Thorns, April 25

For Him and My Family, April 27

Labor Not in Vain, May 2

Jodie Wolfe – Stories Where Hope and Quirky Meet, May 4 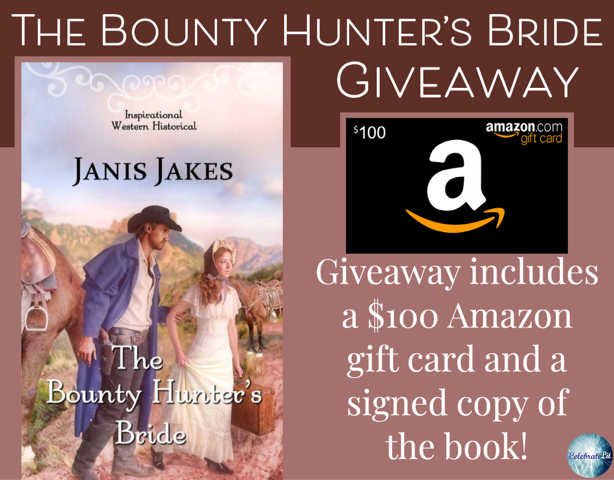 To celebrate her tour, Janis is giving away the grand prize package of a $100 Amazon Gift Card and a copy of The Bounty Hunter’s Bride!!