Book: Grief Exposed: Giving a Voice to the Unspeaking 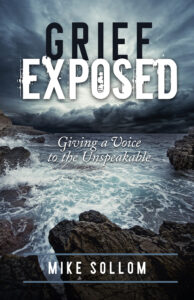 In those dreadful early days and nights after Mike’s son died, the only thing he could think to do, when he collided with the morbid memories of his son’s suffering and the unbearable ache of Jim’s absence, was to find some way to describe how he was feeling. So, he found a spiral-bound notebook and wrote. And wrote and wrote and wrote.

Mike believed if he could assign words to the grief and pain, he might find a way to endure them.  If he could bring those words into the light, it might make the whole thing bearable.   Many of the words were dark and raw and angry and did little more than chronicle ten interminable years of wrestling and railing. But there were island of hope and yes, there were words of light.

Through the gentle and generous encouragement of friends, Mike came to wonder if those words of light, which he discovered in the darkest of nights, might also help someone else endure the unbearable realities of their grief and loss—that they might become someone’s guide.  If they could, then how could he keep those words buried in a stack of spiral-bound notebooks? 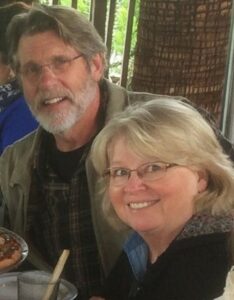 Mike Sollom is a hard-working, Midwest-born, farm boy married to his high school sweetheart. He and LuAnn have raised four children.

In the consequences and aftermath of their son’s death, Mike and LuAnn lost nearly everything. They are “houseless” and living the challenging and adventurous life of modern-day nomads and pilgrims. You can follow their journey at www.mikesollom.com.

My “One Day” Has Come

“One day you will tell the story of how you overcame what you went through and it will become someone else’s survival guide.”

I don’t know who wrote that.  I saw it on a poster with no credit given.  But it’s a good description of how this book came to be and what I hope will be its outcome—its path and its purpose.

Here’s the truth of it: I didn’t set out to write anything. Much less a book.  I still don’t see myself as a writer.  Yet, here I am.

My first-born son died of cancer.

In those dreadful early days and nights after Jim died, the only thing I could think to do—when I collided with the morbid memories of his suffering and the unbearable ache of his absence—was to find some way to describe how I was feeling. So, I found a spiral-bound notebook and wrote. And wrote and wrote and wrote.

I believed if I could assign words to the grief and pain, I might find a way to endure them.  If I could bring those words into the light, it might make the whole thing bearable.   Many of the words were dark and raw and angry and did little more than chronicle ten interminable years of wrestling and railing. But there were islands of hope and yes, there were words of light.

Through the gentle and generous encouragement of friends, I came to wonder if those words of light, which I discovered in the darkest of nights, might also help someone else endure the unspeakable realities of their grief and loss—that my voice might become someone’s “survival guide.”  If so, then how could I keep those words buried in a stack of spiral-bound notebooks just because I didn’t see myself as a writer?

I’m taking a huge risk by plunging back into that bottomless pit of loss and dragging myself through that incessant slog of sorrow once again, unclear of the worth or usefulness of the outcome. I’m exposing my most intimate grief, with all its messiness and vulnerability, uncertain of its reception or the consequences it will bring. I’m giving a voice—my voice—to the unspeakable pain of death and suffering, unaware of who will hear me or how they will respond. Yet, in the face of all of that, I’ve decided it’s a risk I’m willing to take.

“One day you will tell the story of how you overcame what you went through and it will become someone else’s survival guide.”

I guess my “one day” has come.

The topic of this book is not one anyone wants to go through but I found it very honest and helpful. The author rips the bandaid off the cliches  of grief and exposes the hard truth we face as we enter this heart wrenching phase in our life. If you ask around I’m sure someone you know or even yourself has experienced a loss of a loved one. For me it was my brother who passed away three years ago. The pain is still there and I have days where I miss him so much it hurts. Grief has no time limit and we each grief differently. This book is one man’s journey and I appreciated how transparent he was in describing the journey he took on grieving the loss of a son.

Many people think they are helping when they say, “It will get better,” or God didn’t do this, He simply allowed it.” In the middle of  grieving what I found I needed the most was someone to listen to me, allow me to share my pain and hug me. The author shares the struggles  he faced everyday as he walked around numb. I can relate to him thinking how life was normal for everyone around him,  yet he was breaking inside. People tell you to make sure you take care of yourself, but there are times when you just need to be alone.

The book is one that I found shared real emotions and a man who walked everyday not knowing if he was going to cry, be angry or find comfort. His cries out to God are genuine and helped him release some of the pain he felt losing his son. I stopped when I read this in the book. “I wish people would stop saying they’re praying for me.” Because I know they’re not.” How many times have you said to someone, “I’m praying for you,” but then went about your day. God forgive me when I said those words to someone and then didn’t pray. I understand how important prayer is and I don’t want it to be a phrase I say. I want to stop what I’m doing and pray for that person when they ask.

I have learned a lot reading this book and am glad I had a chance to review it. It taught me that there are things not to say to someone grieving and I’m sorry to those who found my words insensitive or judgmental. I have this new sense of grace when it comes to grieving.

“I trust that you believe now that your grief is not a curse. Nor is it a blessing. It is simply where you meet God.”

For Him and My Family, April 20

Because I said so — and other adventures in Parenting, April 27

To celebrate his tour, Mike is giving away the grand prize of a signed copy of the book!!