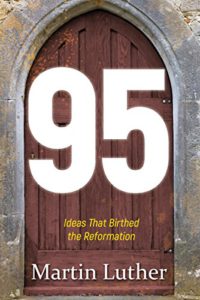 Author: Martin Luther
Genre: Non-Fiction, Historical Theology
Release Date: August 8, 2017
In 1517, an unknown Augustinian monk, informed by his growing belief that salvation is by faith alone, published and distributed a stark criticism of papal abuses in the Catholic Church. In doing so, Martin Luther lit the spark for what would become the Protestant Reformation.
What became known as the “95 Theses” was a series of statements expressing concern with corruption within the church, primarily the selling of “indulgences” to the people as a means of releasing them from acts of penitence.
For the five hundredth anniversary of Luther’s revolutionary writing, This volume combines each thesis with an excerpt from one of his later works to provide a convenient way to understand the ideas and concepts that became the seeds of the Protestant Reformation. 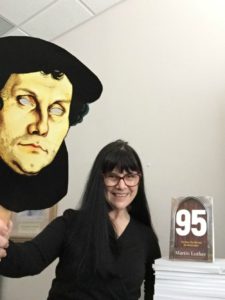 Martin Luther (1483–1546) was a German monk, priest, professor of theology, and iconic figure of the Protestant Reformation. He strongly disputed the sale of indulgences, the church’s practice of selling pieces of paper that guaranteed freedom from God’s punishment for sin. In 1517, Luther directly confronted this and other papal abuses by publishing his “95 Theses.” In 1534, Luther published a complete translation of the Bible into German

In 1517, a thriving new industry was sweeping northern Germany. Begun a few centuries earlier, its reappearance in the 16th century was perhaps the cleverest abuse of church power to date. Church officials strapped for cash decided to offer remission from the punishment for sins, or “indulgence,” to German believers in return for a commensurate amount of money. The slick church salesmanship of indulgences incensed one young priest, who believed that faithful Christians were being manipulated and the Word of God misinterpreted. He wrote a pamphlet comprised of 95 claims that he hoped would inspire scholarly debate. Titled Disputation of Dr. Martin Luther Concerning Penitence and Indulgences, it went down in history as “The 95 Theses.”
Most historians believe that Martin Luther did not intend to spark a public debate. It was written in Latin, the language of scholars, and pinned to the door of the Wittenberg Castle Church which served as a “bulletin board” of sorts, where Luther knew fellow theologians would see it and perhaps engage in a discussion on the topic.
Luther’s pamphlet, how­ever, was not another piece of paper flapping in the wind. Someone translated into German, and distributed it to the public with the help of a recent invention—the printing press. Luther tried to retrieve his work, but the damage was done. Within weeks, the debate that began in Wittenberg spread throughout Germany, and within months, all of Europe.
Five hundred years later, Whitaker House presents each of Luther’s 95 Theses paired with an excerpt from his many writings. Not every excerpt directly relates to the accompany­ing thesis, but we endeavored to select passages in which Luther was expounding on the same subject. Where further explanation was thought necessary to contextualize his words, a footnote is included. We hope you find 95: The Ideas That Changed the World an accessible and fascinating look into the ideas of this groundbreaking priest who stood up for God’s Word, the grace of the gospel—and made history.

My dad was a baptist preacher and I was raised very strict. I don’t remember once hearing about Martin Luther being mentioned once in the church. As I’ve gotten older, I have heard a bit about this man, but not enough to carry a conversation about. I found the book to be quite intriguing but hard to follow at times. I contribute that to my lack of knowledge of this man. I admire him for standing up for his faith and acknowledging that there was some unsavory things going on in the church. I wonder how many of us would be as bold as him? I have always been taught that if it can’t be backed up by the Bible, it is not true. Over the years I have been cautious as to what pastors say. I may not always agree with them, but if I can find scripture that backs up what they are saying, then I know it is from God.

Martin Luther was the type that would not stand for deceit and corruption he felt was going on in the church in the 1500s. In this book is his thoughts of where the church should be and what the Word said. I read the book and wanted to mention a few things he said that caught my attention. In “Theses “ 43 he talks about how we need to remind ourselves “ that our sins are forgiven , that we have the Spirit of Christ, that we are beloved children of God, we should be ever so happy and grateful to God.” Where we fail is when we walk in fear and doubt and forget that God loves us unconditionally. I need to remind myself of that daily.

In “Theses “53 I found it to be very powerful. As we sit in church and listen to the pastor, are we remembering that God ordained him to speak the Words that God ? “Therefore we must not separate or part God and man, according to our natural reason and understanding .” When the pastor speaks I want to soak in His Word and hear His voice. I think we get wrapped up in the man behind the pulpit and forget that he is a messenger for God. We sometimes put pastors on a pedestal and start to worship him instead of God.

I really enjoyed the book and found there to be many nuggets of truth through out the book. Readers may not agree on everything Martin Luther wrote , but I think it is worth reading with open ears and a open heart to see where his faith was. He doesn’t mince words and speaks with authority and truth. Don’t miss this opportunity to learn about a man who “dared to question a practice of the Roman Catholic Church .” 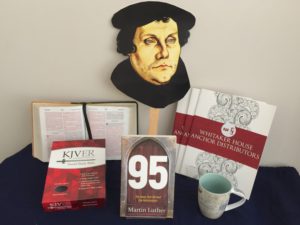