Book: Are You in the Game or in the Way?
Author: Ross Holtz
Genre: RELIGION / Christian Ministry / Pastoral Resources
Release Date: March 10, 2017 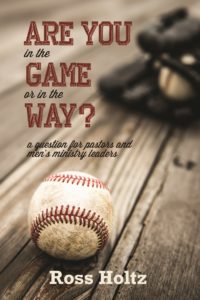 Are You in the Game or in the Way?
A men’s ministry reality check: What is standing in the way of a vital men’s ministry in your church?
The guy who should be at the forefront is often in the way of the program getting off the ground.
·         Are you, as pastor, the main obstacle to the growth of a vital men’s ministry?
·         Are you the guy who wants to start a men’s ministry in your church but don’t know how?
·         Is fear or a sense of inadequacy keeping you from starting such a ministry?
Pastor Ross Holtz tells his personal story of how he became a catalyst for growth, instead of an impediment will inspire pastors and men’s ministry leaders.
What works, what doesn’t, and what is required in forming a vital men’s ministry. Practical and honest teaching filled with relevant and tested examples from recognizing the problem to finding the fix.
Pastor Ross Holtz is a man who has earned the right to speak on ministering to and through men . . . One man’s journey from being a sceptic to a fully-engaged pastor who sees the power of a clear ministry to and through men . . . Pastor Ross bares his heart, and is, at times, brutally honest in a way that will resonate.
—Chuck Stecker, president, A Chosen Generation 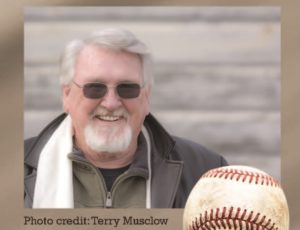 Geoffrey Ross Holtz, DD, is founding and senior pastor of The Summit (ECFA) in Enumclaw. He was awarded “Pastor of the Year” in 2014 by the National Coalition of Ministries for Men. Ross and his wife, Athena, the founder and publisher of Redemption Press, have a blended family of eight adult children and seventeen grandchildren and enjoy time spent sailing.

One thing I can say about the author is he doesn't mix words. He is very transparent and shares his thoughts very openly. After reading the book I realized just how insecure he was in some areas. He didn't like the thought of a ministry starting up unless he was at the forefront of it. It was hard to let go of control and allow men to start a group that would be beneficial to the church.

What I did discover as I dug deeper into the book was God working on the author to allow his flock to grow and spread their wings. Pastors are to disciple not hinder  growth.  I thought it was a bold statement he made when he said, " Church people sometimes go out of their way to be nice; they lie, but they are nice."  It sure isn't something I would want my pastor to be thinking .  It is true that if a pastor attends a group meeting, more people are likely to attend. It is like giving your blessing to the ministry which helps others to feel secure in knowing that it is backed up by the pastor.

Men's ministry has always seemed to be a hard group to start in churches. Many are busy or not comfortable to share their thoughts and open up to each other. I did appreciate that the author said he was not a disciple making pastor. To me that is the root of the problem for many pastors. They are afraid of letting go of of their control. God wants us to disciple others so they can walk in their calling. I remember someone saying in a conference, " You can only go as far as your leader will take you." If they hinder your growth, then they have set you up to fail. It is important to remember that pastors don't know everything and are continually learning just like us.

The book focuses on men's ministry and why it is sometimes hard to start one. A church I attended started a men's ministry but soon faded away. It was clear to many that the leadership of the church didn't support it, so men didn't attend. Any ministry in a church needs to have the backing of the leadership in order to have a chance to succeed. The book would be a good tool for churches. There are a few things I didn't agree with, but it is my own convictions that I have about words or interactions the author had with other men in a setting I didn't care for.

To celebrate his tour, Ross if giving away a $50 Amazon gift card and a signed copy of his book!!
Be sure to comment on the blog stops for nine extra entries into the giveaway! Click the link below to enter.
https://promosimple.com/ps/f0bb/are-you-in-the-game-or-in-the-way-celebration-tour-giveaway
Posted by Deana at 12:02 AM