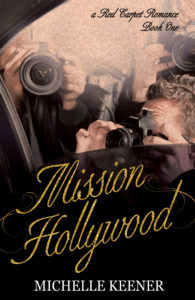 What could possibly go wrong?
Movie star Ben Prescott arrives back in Hollywood after causing a scandal with his ex-girlfriend in Rome. Chased through the airport by paparazzi, he jumps into a limo hoping for a quick getaway. Instead he finds Lily Shaw, a pastor’s daughter and preschool teacher. When the paparazzi capture a photo of the two of them together, Ben’s agent demands that he do whatever it takes to keep the story from hitting the gossip pages . . . even volunteer to work at Lily’s church.
Sparks fly as the movie star and the pastor’s daughter work side by side. When Lily accompanies Ben to the premiere of his latest movie, Hollywood takes notice. Under intense media scrutiny and pressure from the movie industry, Ben must risk his career to follow his heart, but Lily wants the one thing he doesn’t have, faith.
Mission Hollywood is an inspirational story about love, faith, and second chances. 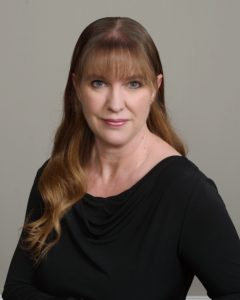 Michelle Keener is a wife, mom, and the author of three books. She lives in Southern California with her retired Marine husband, their two children, and one spoiled dog. When she isn’t writing, she is busy homeschooling, teaching creative writing workshops, or baking something involving chocolate.
Michelle loves to hear from readers and you can usually find her on Twitter @MKeenerWrites or at her website www.MichelleKeener.com

Why Hollywood?
That’s a great question! Of all the places I could have set a Christian romance novel, why pick Hollywood? It isn’t exactly the first place that pops into your mind when you think Christian romance, right?
The truth is I spent four years of my life trying to become an actress. I was a theatre major in the Los Angeles area and I spent a lot of time in Hollywood. I’ve been down Hollywood Boulevard, visited casting offices, and gone to open-call auditions. In those years, I saw the good and the bad of the movie industry. I saw dreams shattered and hearts broken under the glamourous lights of the Sunset Strip. Years later, when I started thinking about writing a Christian romance, I knew Hollywood was the perfect setting to tell the story of God’s unchanging, never-ending love for us.
Mission Hollywood isn’t just one love story, it’s two. The romance between Ben and Lily is definitely swoon-worthy, but there is also the story of how much God loves us. I hope you enjoy Mission Hollywood…it’s only the beginning of the story for the Shaw Family. Book two is coming in February!

I really enjoyed the story because it takes a look at the cost of fame. Many of us think Hollywood stars are happy all the time . They seem to have the perfect life with no stress at all. The author has taken a character and exposed his emotional wounds that he thought would never surface. Ben has been on top of the world with his fame but it all starts to crumble before his eyes. You can feel the tug of war going on as his agent tries to distance Ben from influences that could hurt his reputation.

Lily is a very compassionate person but is hesitant when she runs into Ben unexpectedly. She is not overly excited about being around him, but God has other plans. Lily knows what it is like to lose a parent, but she has no idea the pain that Ben has carried with him for years.

I loved how Ben started to open up to Lily and let his guard down. He has questioned God and asked him why he allows things that hurt to happen. It is a tug of war going on inside of him as he starts to get close to Lily and her family. Lily's dad is a great influence on Ben and takes him under his wing. I had to laugh when I heard the phrase, "holly roller" used. I remember being called that by kids at school. My dad was a pastor so I was constantly made fun of.

I enjoyed reading about the church and the outreaches it does. The church is there to reach out to the forgotten and show God's love. The examples the author uses to demonstrate this is powerful. If we take the blinders off we could see hurting people all around us who need a helping hand.  The story is not preachy but does show how important it is to look past the outside and allow God to show us how to reach others.

The journey Ben takes to find God is emotional and filled with life lessons. Will Ben allow God back into his life? There are a few twists and misunderstandings that leave Lily hurt . Ben has his work cut out for him as he tries to follow the path God has for him. There is a glimpse of jealousy that rears its ugly head and Lily feels the sting of it from a woman who wants Ben for herself.  There is a bit of unexpected turn of events in the story that really had me on the edge of my seat. The author has delivered a wonderful story that touches on greed, jealousy, pride, forgiveness and most of all God's love.

"Sometimes the biggest mission field is the one in our own backyard."

To celebrate her tour, Michelle is giving away a Red Carpet Collection, which includes a signed paperback copy of Mission Hollywood, a custom Pura Vida bracelet in red carpet colors, a signed and numbered print of the original painting “Redemption” by artist Charlotte Lauder, a vintage-Hollywood style postcard, a bookmark, and a magnet!!
Be sure to comment on the blog stops for nine extra entries into the giveaway! Click the link below to enter.
https://promosimple.com/ps/ecf4/mission-hollywood-celebration-tour-giveaway
Posted by Deana at 12:15 AM