MOLLY NOBLE BULL PRESENTS
WHEN THE COWBOY RIDES AWAY

My name is Molly Noble Bull, and When the Cowboy Rides Away, my Christian western historical with a touch of romance, won the 2016 Texas Association of Authors contest in the Christian Western category. 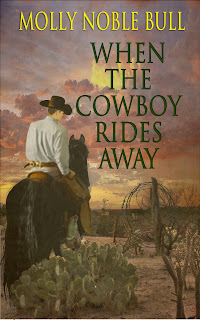 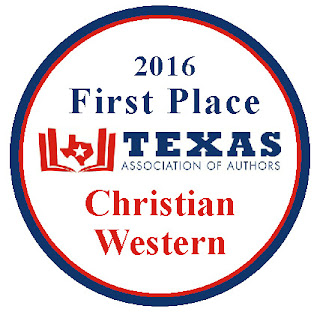 Maggie Gallaghher, twenty-one, runs the Gallagher Ranch in 1880 South Texas and has raised her little sister and orphaned nephew since her parents and older sister died. No wonder she doesn’t have time for romance.
When the Cowboy Rides Away by Molly Noble Bull opens two years after Maggie loses her family members. Out for a ride with her sister, she discovers Alex Lancaster, a handsome cowboy, shot and seriously wounded on her land. Kindhearted and a Christian, Maggie nurses him back to health despite all her other chores. How could she know that Alex had a secret that could break her heart? 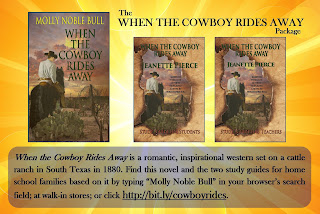 But if you decide to buy the paperback versions instead, nobody will try and stop you.
Take a look.
http://bit.ly/cowboyrides
To see all Molly’s books, visit her website. www.mollynoblebull.com
You can read the first part of some of her books at her website. Just scroll down and click Molly’s Free Downloads. 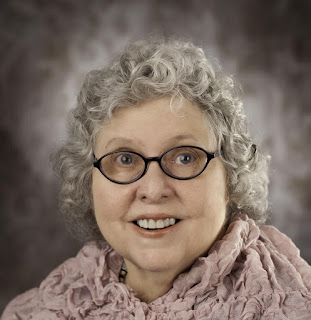 Molly Noble Bull was born in the ranch country of South Texas where she and her family live today and where the setting of When the Cowboy RidesAway takes place. Her father and her grandfather were real Texas cowboys; so it is not surprising that she likes to write westerns.
Molly has published books with Zondervan, Love Inspired, Tsaba House, Westbow Press, Creation House and Elk Lake Press. Though Tsaba House is no longer in business, they published Sanctuary, and Sanctuary won the 2008 Gayle Wilson Award in the inspirational category and also tied for first place in another national contest for published authors that year. Gatehaven, Molly’s Christian Gothic historical, won the 2013 Creation House Fiction Writing Contest as a manuscript, and was published in 2014. The SecretPlace is a reprint of Sanctuary under a new title and a new cover, and her next western will be titled The Rogue’s Daughter.

New Beginnings by Pamela Jo is a 95 page novel in the Christian Amish genre.  It is published by BHG Publishing and was released on December 22, 2015. To purchase your copy from Amazon, click here.

Upon her return from her best friend Charlie’s wedding, Victoria found that the beautiful city of Chicago had never seemed emptier and neither had her soul. She realized she was surrounded by all the people in the world and she still felt lonely. Deciding to take her friend Charlie’s advice and make a change in her life, she packed her bags and moved to the west coast of Florida. Little did she know that the young Amish girl that she met on the sandy beaches of the Gulf of Mexico would begin a spiral of emotional changes for both of them

The book is  a refreshing story about changes , forgiveness , strength and unconditional love.The characters Interact nicely with each other  and as you read the story you feel the depth of their emotions. I love stories that keep me guessing, have great lessons and make me laugh. This book has all that and so much more.

It is never easy when you decide to make a big change in your life. For Victoria she wants to start fresh, begin again, perhaps make a better life for herself. Funny how her journey to stay with her best friend and new husband will bring a new beginning to them as well. Will Victoria be happy for them?

When things change and her place to stay needs to be rearranged Victoria finds herself at a home with a wonderful women who has several other women boarding  there as well. There will be a very special person who will enter Victoria's life that will impact her in many ways. Who is this person? What secret does she have? Will Victoria find a way  to forgive herself from something that she has kept hidden for years?

The book flows at a slow pace at times, but I enjoyed the development of the characters and look forward to the next book in the series. The story gives readers a glimpse into several lives and shows how unforgiveness , illness and changes can affect lives. It is definitely an emotional read that will soften hearts that had become hurt and lead one character to find their way back to Christ. Change is never easy, but sometimes along the way you meet someone who will impact your life and leave you with hope , friendship and A NEW BEGINNING.

I received a copy of this book from the author and Celebrate Lit for an honest review.

Author Pamela Jo, best known as “Whoopie Pie Pam”, is the author of several wonderful story/cookbooks, and the best-selling co-author of the #1 Best Selling series, The Divine Secrets of the Whoopie Pie Sisters.  She is also the founder and creator of the Whoopie Pie Book Club, a well know social media site.
While battling Papillary Thyroid Carcinoma, Pam created the Whoopie Pie Book Club.  For years, she called a group of ladies in her family by that same name.  Every year, they travelled to Amish Country for a retreat of reading Amish fiction, seeing the Amish sights and eating plenty of Whoopie Pies.
Inspired by the Amish for their simplicity in facing life, love of God, and honor for family, Pamela found a connection with the Amish.  As a result of her many years of traveling and conducting business with the Amish, she has established close friendships with many Amish families, friendships that she cherishes.  She refers to them as her extended family.
Contact the author at:
Email:   pamelajo@BHGPublishing.com
http://whoopiepieplace.com
www.facebook.com/whoopiepiepam

To celebrate the release of her newest book, Pamela Jo is giving away a special beach bag, including a Kindle fire tailored for your special day of relaxing at the beach.
Click here to enter: https://promosimple.com/ps/92ba