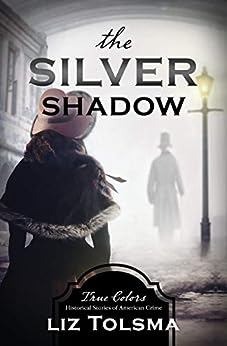 THE SILVER SHADOW by LIZ TOLSMA

I absolutely love this series and look forward to learning about crimes that have taken place during different time periods. This story is set in the 1900s where women were not welcomed in the world of working outside the home. Men believed they should be at home tending to children, doing housework and be at their husband’s beck and call.

I welcomed the star of the story with enthusiasm. Polly was out to prove that women could work outside the home and do it just as well as men. Her time as a reporter was not welcomed by some and I liked how determined she was to succeed. Her strength and wisdom suited her well as she became involved in a story that shook the quiet neighborhood she lived.

Denver was thriving and there was much going on as the city grew and crime picked up. As readers are introduced to this mysterious person who was harming women, I knew it was going to be a race to solve the crime. The author does state that she did take some liberties in the story but I think she did a good job of bringing the characters to life. I was trying to keep up with the little crumbs of evidence but couldn’t quite figure out who it was.

Edwin is a good police officer who won’t rest till he finds the culprit that injured women in vicious  and random attacks. The choice of weapon made me cringe. As the author described the attacks, I could feel the pain that radiated in the victim’s head. It was a horrible  crime and I’m glad that Polly and Edwin teamed up to capture the person. The only problem I had with the story was the way Polly seemed to act  like  was not concerned about her safety. Why did she keep going out at night by herself knowing someone was out  there attacking women? She had been warned many times but she was so determined to break the story she forgot her own safety.

Overall the book was entertaining but it did lack the punch that other stories in the series have had. It lacked details at times and some were not consistent with the story and was confusing. I did like how a group of men came together to help catch the person but they disbanded quickly. The police department was not very equipped to handle a case like this as they continually arrested someone who turned out to be innocent. The story is good but I felt like the ending was rushed and I was hoping for more attention given to the person behind the crimes. It was a great opportunity to delve into the reason he did it and perhaps go back to his past and allow readers to see why he chose to target women.

"I received a complimentary copy of this book from Barbour Publishing and Celebrate Lit and was under no obligation to post a review."