Murder on the Mother Road
by Glenn Nilson

Maybe it was the Harley (my husband rides one), more likely it was simply Bobby Navaro. He is just a solid good character. Somehow I felt as though I had known him for years. I immediately felt as though he were a character to be trusted. That combined with an engaging mystery had me hooked until the end.
~Booklady’s Booknotes
Glenn Nilson has written an intriguing mystery set in the Arizona desert… Beautiful descriptions, a wonderful storyline, and plenty of action keep me hooked from beginning to end.
~My Funny View of Life
…started reading and stayed up late into the early morning to finish it. I just couldn’t put it down…It is a fantastic story. I may have woke up with a book hangover, but this story was worth it.
~Escape With Dollycas Into A Good Book
This was a great cozy mysteries that is very different from the typical ones you read, in this one we have a biker riding around trying to solve a murder …
~Community Bookstop 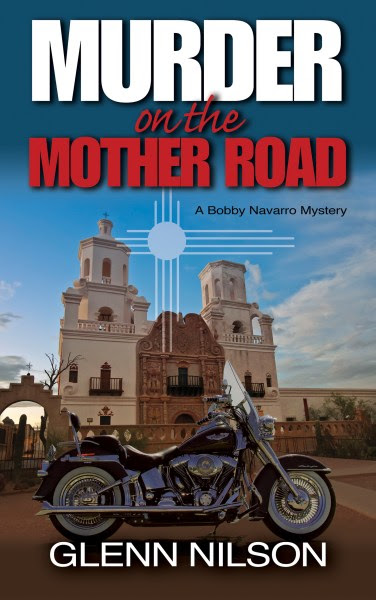 Murder on the Mother Road:
A Bobby Navarro Mystery

Bobby Navarro rides his Harley into another adventure when he discovers the body of a young woman in the trunk of a parked car in Williams, Arizona, on old Route 66.
Who would leave a car, with a body in it, parked on the main street of town? And, who told the police Bobby had been the driver of the car, because they soon take him to the police station to conduct an “interview”.
Then, to make matters worse, Bobby realizes one of the police officers is a woman he had a crush on in high school. And, that’s just his first night in town. Next morning, Bobby has breakfast at a local diner, where everyone is talking about the murder and the arrest of one of the diner’s cooks. The staff don’t think the suspect is guilty of the crime, and one of the locals, Daryl King, lets slip to Bobby that he knows who the guilty party really is. Trouble is, Daryl won’t tell the police whatever it is he knows. In fact, Daryl has trouble talking with anyone. The fact that he made an exception in Bobby’s case, leads to Bobby agreeing to work with the police to find out if Daryl does know who the killer is. Bobby’s part in the investigation takes him to the Holiness Pentecostal Church of the Brethren, a church run by an ex-biker and two of his former gang members. There, he discovers a host of suspects, leaving Bobby to wonder whether he will have to “get religion” in order to help solve this Murder on the Mother Road. 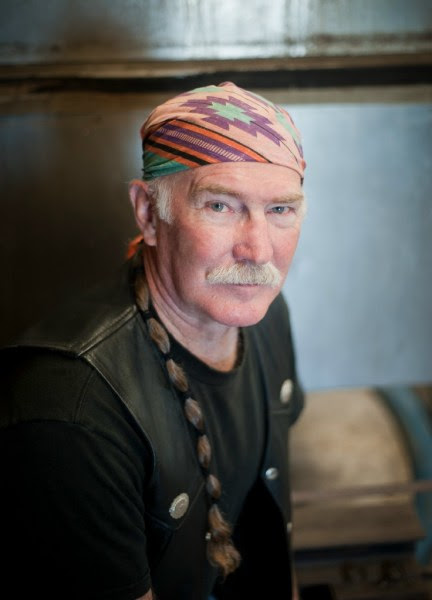 About The Author –
Glenn grew up on a farm in the Sierra Nevada foothills of California, hiking, hunting, even panning for gold.  After college, he served as an officer in the Navy, then earned a doctorate in sociology and taught at a branch of the State University in Connecticut. There, he developed, directed and taught a criminal justice program. Upon retirement, the West drew him back, this time to New Mexico, the setting for his first novel, Murder on Route 66. Currently, Glenn divides his time between living in rural Florida and up-state New York, writing and refurbishing an 1870’s-era, creek-side cottage.  Whenever possible, he enjoys cooking, riding his own motorcycle and camping.
Author Links
Webpage – http://glennnilson.com/
Blog – http://glennnilson.com/blog/

I was very intrigued by this book when I saw the cover. My husband and I are Harley riders so I knew I had to read this book. Bobby is a very like able character. His mistake was stopping off in a town where he is a witness to a hit and run. Bobby believes in doing the right thing but was unsuccessful in getting the driver to stop. What happens next will change the course of his visit to this little town.

I loved the description of the people in the town. There is a little cafe that seems to be the place to hang out, eat and catch up on gossip. Guess who the town is gossiping about ? Well it is none other than the stranger in town known as  Bobby Navarro. That little hit and run incident turned up a dead body in the trunk and Bobby was standing there when the police arrive. Of course the police immediately suspect Bobby of murder. Isn't that just like a small town to suspect an outsider when a crime is committed? Booby is determined to clear his name and find out who killed the person he saw in the trunk.

I loved the way the author described the area that Bobby camped at. I could smell the campfire and feel the gentle breeze as Bobby sat and enjoyed the evening. This is my first book that  I have read from the author, but if will not be my last. He writes with great detail, keeps the storyline intriguing and throws in some twists and turns that keeps  readers glued to the book. There are very interesting characters in the story and I loved how the author weaved them into the mystery with ease. Who will turn up as the murderer? Can Bobby find out before he gets hurt? Who is trying to stop him from finding the truth? Get ready  for a great cozy mystery that is a little intense, with the main character who pulls no punches and doesn't back down from trouble that  comes his way.

I received a digital copy of this book from Great Escapes Virtual Book Tours for an honest review.


Have you signed up to be a Tour Host?