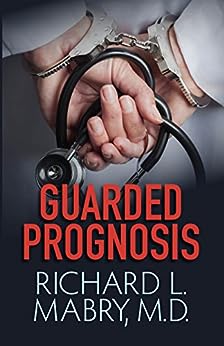 There is nothing better than sitting down and reading a new book by this author. It is always filled with intrigue and characters that jump off the pages. This book is one that keeps you guessing and has action throughout the story. I loved how the author gives us characters that intrigue us.

Caden is a very respected doctor and is confused when DEA agents show up at his office. If someone showed me credentials I wouldn't know if they were real or not. Is Caden being deceived by these men? I was fascinated with the investigation into illegal drug prescriptions. The investigation seems legitimate but Caden was starting to wonder if he should be worried.

Henry is a very complex character. He doesn't have the greatest relationship with his son, Caden  which makes their phone conversations strained. The news isn't good and Caden is a bit frustrated that his dad is so calm about the news he shares with his son. Henry made me want to scream at him sometimes and tell him to let Caden be part of his life.

I loved how there were a story within a  story and it focused on trusting God. Caden is not only dealing with what's going on at his clinic but the diagnosis his father has received. Their relationship will take a lot of work to heal wounds that have long been buried.  The realism of their fragile relationship is captured very well with the talented writing of the author.

Caden will have to be on his toes as the investigation into  his clinic grows into a dangerous situation. Who can Caden trust? Will he let others help him or try to fix it on his own?  One of the subjects I loved the most in the book was how Caden and Henry were prideful. They each wanted to ignore people and do things their way. Sometimes when we go out on our own, we end up making situations worse. As the story intensifies, Caden realizes that not everyone and everything is as it seems. Who is behind the illegal drugs? Will Henry resolve his relationship with his son before it is too late? Don't miss this latest book from one of the best authors who writes stories that keep readers on the edge of their seats with intense action and intrigue.

I received a copy of this book from the author. The review is my own opinion.
Posted by Deana at 3:29 PM