After the Rain by Rita Gerlach -- Blog Tour Review + Giveaway 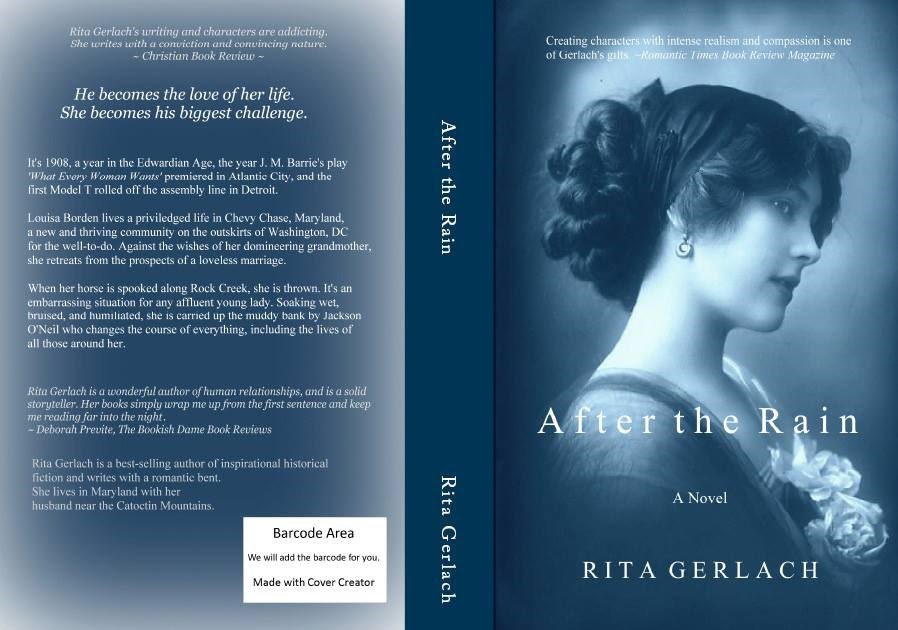 He becomes the love of her life. She becomes his biggest challenge.

It's 1908, a year in the Edwardian Age, the year J.M. Barrie’s play What Every Woman Knows, premiered in Atlantic City and the first Model T rolled off the assembly line in Detroit. It is a year when the world faced one of its worst disasters in history, when the New Year would heal the wounds of loss. Louisa Borden lives a privileged life in Chevy Chase, Maryland, a new and thriving community on the outskirts of Washington, DC for the well-to-do. Against the wishes of her domineering grandmother, she retreats from the prospects of a loveless marriage and instead searches for what she hopes is her calling in life.

When her horse is spooked along Rock Creek, she is thrown from the saddle—an embarrassing situation for any affluent young lady. Soaking wet, bruised and humiliated, she is carried up the muddy bank to safety by Jackson O’Neil, a stranger to the city, who changes the course of everything, including the lives of all those around her.
Available to purchase on
- AMAZON - Rita Gerlach is a best-selling author of inspirational fiction with a romantic bent, including The Rebel’s Pledge, Thorns in Eden and The Everlasting Mountains, Surrender the Wind, and The Daughters of the Potomac Series. She lives in Maryland near the Catoctin Mountains with her husband Paul.
GOODREADS | FACEBOOK | TWITTER | PINTEREST | AMAZON | WEBSITE

Join Celebrate Lit and Rita Gerlach for our book club meeting on January 28 and February 7. This will be like a traditional book club but online.  We will fellowship, discuss After the Rain, grow closer to the Lord and have fun together! The Fun starts at 4 pm PST/ 5pm MST/ 6 pm CST/ 7 pm EST at https://www.facebook.com/events/1687681504803294/.

​Louisa Borden is a very pretty young woman. She has had her share of heartache and now lives in a mansion in Chevy  Chase. Her grandmother is very stuffy and stern. She rules the mansion and  is quite rude at times to people. Beatrice, the grandmother has decided that Louisa is to marry Rupert Eastcott. He is a very wealthy man who will provide well for Louisa. There is of course one problem with that decision. Louisa does  not love   Rupert at all and refuses  to live in England with him.

One day while Louisa is out riding she is thrown from the horse and a man  happens upon her. Jackson O'Neil helps her get back up the slippery bank that she fell into. Poor Louisa is embarrassed but doesn't miss the fact that her rescuer is quite handsome. They become attracted to each other, much to her grandmother's very vocal disapproval.

The story is so well written and the author has a great knack for letting a story flow across the pages with emotion and mystery that it is hard to put the book down.  Louisa will endure heartache, deceit and a feeling of loneliness that she can't escape. Rupert will stop at nothing to win Louisa's hand in marriage. Will Louisa believe the lies Rupert tells her about Jackson? What secret will her grandmother tell her that will have her heart break into pieces like shattered glass?

When her father goes  away on a business trip , a devastating natural disaster happens that could claim his life. Will Louisa be strong enough to carry on and honor her father's wishes if he doesn't survive? It has been awhile since I have read a book of this caliber. The history in the story is real and described in great detail. The story is filled with so many raw emotions that I found myself crying at times, and gasping at the surprises throughout the book. I got so involved in the book, that I blocked out the world around me and traveled back in time with Louisa and watched her beautiful story unfold. There are a few funny moments in the story that will make you chuckle as you get to know Louisa's aunts. This story is one that will stay with me forever. It's a  breathtaking story that goes through an aray of emotions which will grab at your heart and keep you engrossed in a magnificent story of love, hope and family and forgiveness.

I received a copy of this book from  Celebrate Lit and the publisher for an honest review. 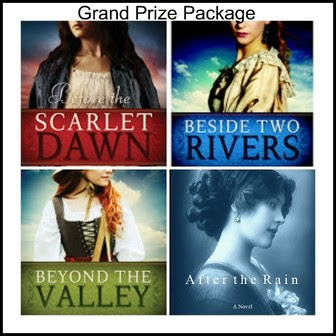 a Rafflecopter giveaway
Posted by Deana at 7:53 AM