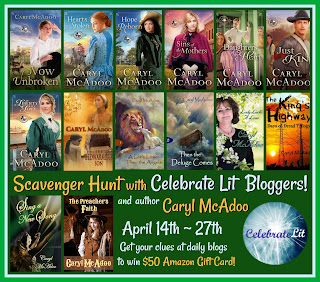 Welcome to Celebrate Lit's Scavenger Hunt Featuring Caryl McAdoo. Be sure you visit each blog to find the secret word for the giveaway. 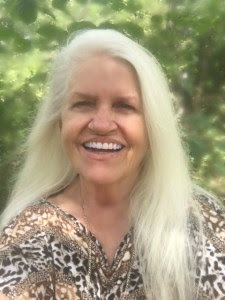 Caryl McAdoo prays her story brings God glory, and a quick scroll through her novels’ rankings by Christian readers attests to the Father’s faithfulness. She loves writing almost as much as singing the new songs He gives her—look her up on YouTube to hear a few. Her high school sweetheart husband won her heart fifty-two years ago, and now they share four children and seventeen grandsugars. Ron and Caryl live in the woods south of Clarksville, seat of Red River County in far Northeast Texas, waiting expectantly for God to open the next door. 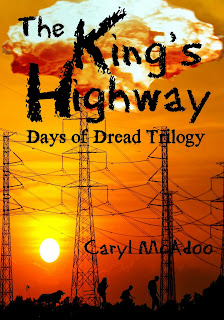 BLURB:
A mysterious dead man directs the small band on their journey to a much safer corridor he dubs The King’s Highway.
Airplanes are falling out of the sky, and all things electric rendered useless after a mysterious flash. It tests the grit of fifteen-year-old Jackson Allison when the care and safety of his younger siblings fall solely to him. No one knows for sure what’s happened, but danger lurks if they stay. With a fierce determination to keep his thirteen-year-old sister McKenzie and nine-year-old brother Cooper safe, the high school freshman is compelled to leave their Irving home in the shadow of the DFW Airport for their grandparents’ farm a hundred-plus miles northeast.
Thrust into a lawless, chaotic world, he’s guided by an ever-changing cryptic note that leads his growing troupe along the King’s Highway. Bullies, Russians, wild animals, gang-bangers, and kidnappers thwart their progress while a lack of drinkable water and food is a constant concern. Will he ever get his people tosafety in the Red River Valley in far Northeast Texas?

I have read a lot of books by Caryl and have become a huge fan of her writing. She is very gifted and makes each story come to life.  If I could write a perfect description for this story, it would be something like " The End of Times has come to Texas in this perfectly illustrated story."  The author has once again surprised me with her gift of exploring a theme that many have talked about but few are ready for.

From the very beginning, I admired Jackson. I found him to be a very compassionate and smart young man. What would you do if suddenly there was no electricity? You could hear chaos going on in the streets and you knew you had to get your siblings to safety. Jackson takes command in an orderly fashion and decides the best thing to do is go to where his grandparents live. McKenzie and Cooper were not quite sure if they should leave the safety of their home, but Jackson knows it's time to get out of there.

I was very intrigued by the old man who appeared to Jackson. His wisdom was helpful and guided Jackson on the journey that lay ahead. Would it be hard to listen to someone you couldn't see? That is exactly what God wants us to do. I could sense Jacksonngrowing in faith as he became more in tuned with the voice. The siblings meet several characters along the way that will be a challenge for them. m the very beginning, I admired Jackson. I found him to be a very compassionate and smart young .


I loved the dog and found him to be a valuable character in the story. He was loyal, protective and has a keen sense of danger. I loved how he took to the kids right away. It seems like he was sent to protect them. Isn't that just like God to send us something for protection ? The story is very intriguing and I was very impressed with how the author delivered a story that makes us think about how much faith we need to  have if we were  faced with a similar situation. She writes with such depth and details that you feel a part of the story. This is one series you don't want to miss. I am anxious to continue reading the next book to find out what happens to Jackson and his siblings? Do they reach their destination? Where did their mother disappear to? What dangers lay ahead for them? Will they stand strong and trust God? Get ready for an action packed story that will have you on the edge of your seat.

I received a copy of this book from Celebrate Lit and the author. The review is my own opinon..

gs to safety. Jackson takehttps://promosimple.com/ps/ca82s command in an orderly fashion and decides the best thing to do is go to where his grandparents live. McKenzie and Cooper were not quite sure if they should leave the safety of their home, but Jackson knows it's time to get out of there.