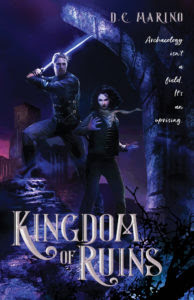 Author: D.C. Marino
Genre: Fantasy
Release Date: July 27, 2018
In the Lands Within, history does not rest. Each archaeological layer communicates with the living generation, choosing its friends and enemies—and its kings. But an alliance has been struck no one could have anticipated, and an ancient evil is soaking into the soil. History is being erased, purchased and re-written at a terrible price. And a kingdom that shouldn’t have been forgotten is fading from memory.
In the Lands Without, archaeologist Lori Brickland has found a pottery shard with a heartbeat. The pulse might be a trick of the mind, or it might be the first sign of life in a world of ruin. An exiled traveler will say she shouldn’t search for the truth, a calculating ruler will say she’s the one he’s looking for. And the kingdom? The kingdom will need her before the end. It’s time to accept what she’s always known…
This isn’t archaeology.
This is war.
Click here to  purchase your copy! 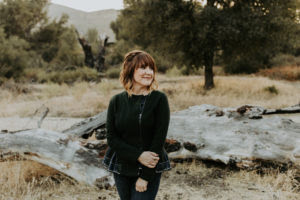 D.C. Marino is a dedicated reader of history books and fantasy novels, both of which occupy an equal amount of space on her bookshelves. But it wasn’t until she realized how one breathed life into the other that she became addicted to finding the intersections of the real world and the fairy story. Still more: what those intersections about us as a creative, curious people. Kingdom of Ruins is her debut novel.

Hi everyone!
I’m so excited to share Kingdom of Ruins with you! This story has been on my heart and mind for over ten years now, so this feels a bit surreal. I’d love to tell you a bit about why I wrote this book. But in order to do that, I need to tell you why I almost didn’t.
Fantasy. It isn’t real. Why should I spend time writing a story that doesn’t grapple with the actual issues of the day? Why not speak plainly, instead of inventing another world to explore the real one? These were the questions I asked myself every night before I fell asleep. I adored fiction that transported me to factual events, or introduced me to historical figures, but every time I picked up a pen, the fantastical wiggled out of it.
I was afraid I was writing the wrong story.
This story oddly (or not so oddly) enough began with Lori, an atephobic archaeologist. Meaning she had a passion for archaeology, but a phobic fear of ruins. Why would she shrink back from the work she loved? Because no matter how hard she tried, she couldn’t make whole the broken. Life ends in dust, and that’s all there is to it. I felt the same way. Not only was I writing something I wasn’t sure would be relevant, but could it mend anything? Make a difference? Or was it futile, like trying to resurrect the past?
What I found was exactly what Lori begins to find in Kingdom of Ruins. That even though things seem unfixable, it isn’t the end. The world Lori enters is full of darkness and peril, but it also holds a chance for her to heal from more than just her fear. While I wrote, and especially as I neared the last chapter, I realized she and I had both overcome a great challenge. I won’t tell you her conclusion, but I will tell you mine:
I wrote the right story.
I hope you enjoy every bit of the journey as I did, dear reader.
D.C. Marino

What an extremely well written journey the author takes us on. Loris is an archaeologist who takes her work serious. Her grandfather has taught her well to respect what she finds. I found it fascinating to read about the artifacts she finds and she can sense they are trying to tell her something. Lori feels like she has developed an hereditary illness that her mother had. Atephobia is the fear of ruin. But that can't be possible because she can feel the pulse of an artifact when she touches it. It is telling her when it is from, or what happened to it.

She has decided to leave it all behind and find another job, but something happens to pique her interest once more. What would it be like to touch something buried and long forgotten only to feel it thumping in your fingers as if to say, "I was important at one time. I have a story to tell." Lori's adventure starts when she follows a man who was intrigued by an artifact in her grandfather's museum. It was as if the artifact was there and then for a brief moment disappeared then reappeared before her eyes. About this time, I would be asking myself if I was having an hallucination and needed medical attention. When the man she followed on the train has a ring that does the same disappearing act, Lori is determined to find out what connection he has to the artifact.

The story explodes as Lori finds herself in another world where trees whisper and blue lights dance across the sky. The strange man whose name is Thane,  is there and quickly tells her to follow him. I could vividly see the stranger as he lifted his sword and took authority over the threat that was close to him and Lori. Who was this stranger that dressed in armor with a sword that disappears as suddenly as it appeared? Lori has stumbled into something that will test her faith and sanity. The author has an impressive imagination and the story is fantasy at its best. I don't read a lot of fantasy books, but the author has convinced me that I have been missing out on a genre that is plentiful in action and details.

The Lands Within is a mystical place filled with kings, history and danger. I felt transported there as Lori felt the place start to talk to her. She has anxiety but I loved how she talked herself through it. I liked when Lori said, "When something shocks you, it's easy to think you are the only one who's shocked by it." We can sometimes think we are the only ones affected by something, but forget others around us are experiencing the same thing. We can be shocked when we encounter something that scares us, but we forget that others have probably experienced the same thing. It makes me think of someone seeing their house destroyed by a fire and then realize their neighborhood is being destroyed. We forget about what others are going through because we are so focused on ourselves.

Lori and Thane find themselves in danger as they race through the Land Within. It is non stop action and along the way they meet interesting things that can only be described as a presence we have never experienced. I have learned through this story that you can trust others and your own instinct. The world Lori travels to is rich in greed, sin and power. Will she be able to fight it off or fall for its trickery and promises?  Throughout the story I was impressed with Lori's ability to overcome her anxiety and rely on her instincts. I can't wait for the next book in this series to continue following Lori and Thane.

To celebrate the tour, Celebrate Lit Publishing is giving away a grand prize of a $50 Amazon gift card!!
Click below to enter. Be sure to comment on this post before you enter to claim 9 extra entries! https://promosimple.com/ps/ced0/kingdom-of-ruins-celebration-tour-giveaway
Posted by Deana at 2:32 AM