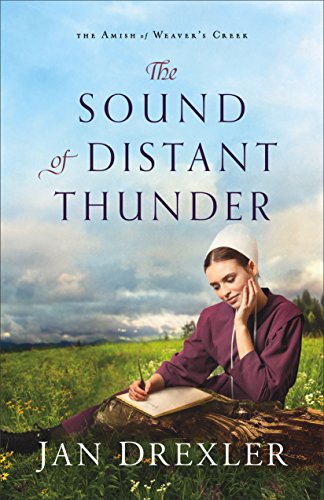 THE SOUND OF DISTANT THUNDER by
JAN DREXLER

I am not very familiar with this author so I was excited to read this book. It has some promising things in the book which kept me reading. I did have a very hard time connecting with the story at times though. I did like that it was set during the Civil War. It was interesting to read about the Amish during this time. Most books about Amish are not set during the Civil War.

Jonas is a good character with a few flaws. He is in love with the starry eyed Katie who only wants to be his wife. He on the other hand, has dreams of something else. Although Jonas shows signs of thinking of marriage I got the impression he was going to do something very seldom done by Amish.

He gets an opportunity to right a wrong by standing up for something he believes in. Slavery during this time was prevalent but Jonas does not condone it. I liked that he took his brother's place in the service. It was very courageous and I hoped being there would help him decide what he wanted to do with his life. During his service I enjoyed reading about what he went through and how war can cause emotional scars.

Poor Katie is distraught when Jonas leaves and I could feel her desperation. Was she worried about Jonas or that they hadn't married before he left? The best part of the story for me was the correspondence between Katie and Jonas as he is serving in the army.It reads like poetry and you can feel the depths of their passion for each other. Overall I have to say at the end of the book, I became a fan of the author. I love her writing style and ability to draw readers in with descriptions of Amish life and their commitment to each other.

I received a copy of this book from The Early Reviewers Program of Librarything. The review is my own opinion.
Posted by Deana at 11:07 PM