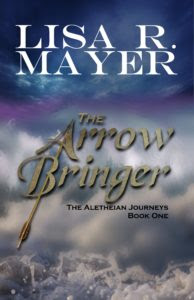 Book: The Arrow Bringer
Author: Lisa Mayer
Genre: Allegorical Fantasy
Release Date: March 19, 2019
Evie could’ve saved Aletheia. Now it might be too late.
Evie Lewis has just been diagnosed with leukemia at sixteen. Then, a powerful being called the Arrow Bringer offers her a choice: spend her last days in peace or save Aletheia. She stays. But then Shawn Lawrence—the closest person she has to a friend—goes in her place. Now Evie must save Shawn and race to fix her mistake as a shadow falls over Aletheia. Even as leukemia consumes her body, a new enemy and more imminent perils pursue her. And she must endure all and save Aletheia while keeping her darkest secret:
that it’s all her fault. 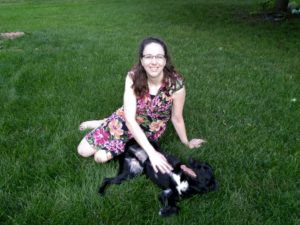 Lisa Mayer recognizes, far better than most, the power of words. She also understands that what people need to know about Jesus is that His love is unconditional, His mercy is unending… and that there are no lengths to how far He’ll go to save His people.
Jesus melted Lisa’s hard heart through words. Now, she hopes to use her words to do the same for others. She loves Jesus and His people and you won’t find a judgmental bone in her body. She lives in Indiana with her husband, Rich, and her furbaby, Scooby. She loves writing, and in her free time, you’ll find her curled up in her superhero pajamas binge-watching her favorite movies and TV shows.

The Lamp Post
The inspiration to write a book often starts with a dream. Mine started with a lamp post.
I had no idea that after watching The Chronicles of Narnia: The Lion, the Witch, and the Wardrobe in December 2005 my life would never be the same. From that moment, I read every Narnia and C.S. Lewis book I could get my hands on. I searched for Narnia in every wardrobe and ended up finding it deep within my heart… and that’s when I knew I wanted to write a modern Christian-fantasy series inspired by Narnia. And the first book of The Aletheian Journeys came to life—The Arrow Bringer.
I’d like to say that my first draft was pure magic. But my journey was only beginning, and I had a lot to learn. Writing is an art and requires the patience of a sculptor. I began with a large block of marble and a vision, and then sculpted away until I discovered the beauty underneath.
In truth, it wasn’t just the writing in and of itself that makes The Arrow Bringerspecial to me. It’s about what The Arrow Bringer reflects—that as I became a better writer, in a way I also became a better person. I learned who I am and accepted myself, my characters taught me to be strong, and I fell more in love with Jesus.
Don’t get me wrong. I want The Arrow Bringer (and the six following novels in The Aletheian Journeys) to make it—make an impact, make a difference, make straight His paths. C.S. Lewis changed the world with Narnia. Anyone who reads it knows what it is to love Aslan better here by knowing him first in Narnia. And yet all of us still hunger for something that we can’t explain—and that is Jesus Christ.
At its heart, The Arrow Bringer is a love story. The story of the love of the Arrow Bringer for this people, for friends and family struggling to save Aletheia, and a story of love between us and Jesus. The story is meant to inspire, to bring hope, and to remind you of how much you matter. I sincerely hope, with all my heart, that you will find the Arrow Bringer not only in Aletheia… but in every chapter of your life.
It wasn’t just my writing journey that began with a lamp post… but my journey with Christ. By coming further up and further in, I found more than I ever could have dreamed. I hope the spark from that lamp post will fuel The Arrow Bringer, honoring the legacy of C.S. Lewis, and inspiring a new generation. Within The Arrow Bringer, I hope you’ll find joy, romance, friendship, and adventure. Most of all, I hope you discover that Jesus’ mercy has no end… and He loves you far more than you could ever imagine.

The book is a real journey into a world that defines light versus darkness. At the beginning we find out that Evie at the young age of sixteen has been diagnosed with leukemia. Her parents are in shock and Evie is trying to come to terms with her mortality.  Suddenly we are swept into another world where she is given a choice.

I really liked the way the author told the story and how Evie was told, " You alone choose your path during life-him, or me." We each decide who we want to follow until our last breath. This was such a good scene and one I hope everyone will take note of. Evie must choose where she wants to spend eternity, just like we have the same choice right up to the last breath we take. The story goes on to explain that we are forgiven when we follow Him.

The Arrow Bringer is powerful and compassionate at the same time.  Evie finds herself in a place where she must decide to spend her last days in peace or do something that could change everything. She has the chance to save Aletheia. At first I thought maybe she was dreaming but the author thrusts us into a world that Evie has known from birth. This place is where she came from. She will find adventure , danger , deceit, forgiveness and peace.

The story is easy to follow and the message is clear. Who will Evie follow? Will she trust The Arrow Bringer to keep her safe as she tries to do the right thing? The love that God has for each of us is definitely represented in this story and sends a message of hope.  Can Evie ever believe that she is loved? Can she finish her mission before it is to late? There is so much in this story that can teach us about forgiveness and unconditional love. One of the things I liked was the sacrifices made because of love.  The ending is an epic battle that will send shivers down your spine.

" Every sacrifice has a purpose." " All will be revealed to those who are courageous enough to persevere."

To celebrate her tour, Lisa is giving away a grand prize of a Narnia gift basket that includes a signed copy of The Aletheian Journeys: The Arrow Bringer, the entire The Chronicles of Narnia series by C.S. Lewis, The Lion, The Witch, and The Wardrobe on Blu-ray and a movie companion booklet, and two of Lisa R Mayer’s favorite Narnia reflection books in pristine condition from her personal collection: The Heart of the Chronicles of Narnia: Knowing God Here By Finding Him There by Thomas Williams and Believing in Narnia: A Kid’s Guide to Unlocking Secret Symbols of Faith in C.S. Lewis’s The Chronicles of Narnia by Natalie Gillespie!!
Be sure to comment on the blog stops for nine extra entries into the giveaway! Click the link below to enter. https://promosimple.com/ps/ddeb/the-arrow-bringer-celebration-tour-giveaway
Posted by Deana at 2:00 AM