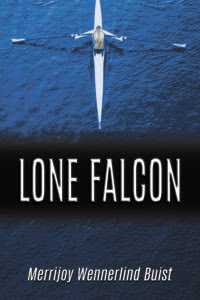 Book: Lone Falcon
Author: Merrijoy Wennerlind Buist
Genre: Christian Romance/Coming of Age
Release Date: October 2, 2018
What if you had to choose between your friends and your faith?
It is 1971. Eighteen year-old Carrie Falconer goes to college and joins the rowing team, where she receives praise and popularity for the first time. She also finds her first boyfriend. Not just anyone, but the heart-throb men’s crew captain! As coxswain of the varsity squad, she leads her team to four gold medals, allowing them to qualify for Nationals. However, while pursuing her collegiate dreams, she has left behind most of her traditional religious beliefs. While preparing for the National tournament, she is hit by a life changing consequence and is forced to decide between pleasing her team or letting them down by following what she believes to be the right path. 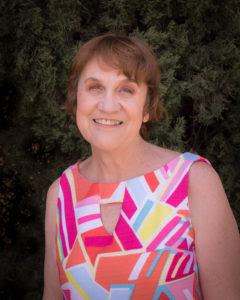 The first four chapters of Lone Falcon and the general plot were written when Merrijoy Wennerlind, was a student at the University of Washington. The rest was finished up years later by Merrijoy (MJ.) Buist who worked hard to keep her 24-year-old spirit alive.
MJ. is currently a Diaconal Minister at the Anaheim United Methodist Church. A native of Seattle and a UW graduate, she lives in Santa Ana, California with her husband and two sons. She is currently working on the sequel, Lone Choices, which tells how Carrie lives out her decision. You can reach MJ. at her facebook page: Merrijoy Wennerlind Buist@mjwb 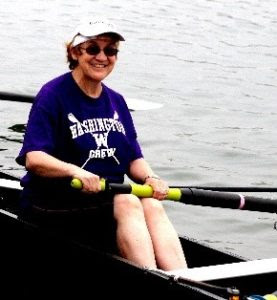 How far would you go to research your book? Would you sit on a narrow crew boat with eight other women and learn to row? That’s what I did to get a feel for what my main character, Carrie Falconer, in Lone Falcon experiences as she joins and excels in the college crew team.
Why did I choose rowing over another sport? I couldn’t resist the metaphor of steering your own boat, which led me to the sport of rowing and its navigator, the coxswain. I fell in love with the idea of choosing your own path and what happens when one goes off course.
You, the reader, will follow Carrie from her strict Christian upbringing to attending a secular college, experiencing her joys and victories as she rises to popularity, and of her first love, the hunky Lenny, men’s team captain. You will struggle along with her as she makes a life decision of whether to turn back to her faith or do what her friends ask.
I originally wrote Lone Falcon in response to all the Young Adult (YA) books and T.V. shows of the times which said, “Your parents and their beliefs are all wrong, do what your friends and the times say.” In the wisdom I’ve acquired in my years of mothering, earning my master’s degree, and becoming a Minister, I adjusted my theme to making your own choices, not what others and society may tell you to do.
I hope this book will encourage other brave young women to live up to what they believe within and not be influenced by what others without tell them to do.

I have mixed feelings about this book for a few reasons. I did found the story interesting and was quite surprised at the details the author gives us about rowing. It sure takes lots of practice, endurance and determination to make it in this sport. It is a team effort and I liked how the girls worked together to make the team a success. The main  focus in the book is on  Carrie during the early 1970's . I think I had forgotten what it was like to grow up during that time.

Carrie was very grounded in her faith but it is tested as she goes off to college. I was very upset the way her father and brother treated her. She couldn't do anything to make them proud of her. Her father was especially hard on Carrie and continually found  fault in everything she did. I was able to relate to her because I grew up as a preacher's kid. Nothing I did was ever good enough for my parents and they  were never proud of me for anything. I did like how Carrie proved to herself that she was important and able to achieve goals.

We all know about peer pressure and Carrie struggled to fit in. Many of us growing up have probably faced being made fun of because we were a Christian. In the 1970's it was about women's lib, freedom and carefree attitudes.  It was easy to see where Carrie was headed as she slowly slipped away from her Christian friends. The story does a good job of showing the consequences of a bad decision that not only will have heartache but change the course of Carrie's future. There are a few very important people in Carrie's life that will help her forgive herself, speak words of love into her life and lead her back to God.

The reason I have mixed feelings about the book was for several things. There were several times throughout the book the language was foul and unnecessary. The author could have chosen other words that would have been less offensive. The book does deal with fornication, abortion and drinking. I was hoping that the young man involved with Carrie had been made accountable for his actions. I was hoping that Carrie's boyfriend would face charges or at the very least be expelled from college. I won't say more because I don't want to give away the story.

The book is a good story for everyone but especially young people. There are temptations out there and in Carrie's case she made the choice to follow her boyfriend into an environment that she knew could lead to something she may not be able to control. It is sad that her father and brother never comforted her or showed her any compassion. I am looking forward to the next book that follows Carrie as she continues her journey.

To celebrate her tour, M.J. is giving away the grand prize of a $50 Barnes and Nobles Gift Card, autographed copy of Lone Falcon, and autographed copy of Lone Choices when it comes out!!
Be sure to comment on the blog stops for nine extra entries into the giveaway! Click the link below to enter.
https://promosimple.com/ps/f0bd/lone-falcon-celebration-tour-giveaway
Posted by Deana at 12:03 AM