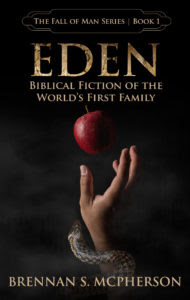 “You want me to tell of how I broke the world.”
It’s the year 641 since the beginning of the world, and when Eve passes away, she leaves Adam the only man on earth who remembers everything from the beginning of the world.
When Enoch, God’s newly appointed prophet, decides to collect the stories of the faithful from previous generations, he finds Adam in desperate need to
confess the dark secrets he’s held onto for too long.
Beside a slowly burning bonfire in the dead of night, Adam tells his story in searing detail. From the beginning of everything, to how he broke the world, shattered Eve’s heart, and watched his family crumble.
Will Enoch uncover what led so many of Adam’s children away from God? And will Adam find the redemption and forgiveness he longs for?

MY REVIEW
I understand that when an author writes Biblical fiction, they may choose to take some liberties in retailing the story. I have taken that fact into consideration as I write this review. I am disappointed in this story for many reasons. I didn’t want to read an account of Adam and Eve that barely resembles the true story from the Bible. Unfortunately this is one that took too many turns away from the truth and made it almost a completely different story that is unrecognizable .
The very beginning is easy to follow when God creates everything. We are introduced to Adam and suddenly I felt like God was not a Heavenly being but an actual person. We see the two chatting like old friends and walking around together like buddies. One of the things that really struck me as weird was Adam having conversations with the serpent. I don’t ever remember Adam walking around talking to the serpent about cucumber seeds or anything at all. Why does that bother me so much? It has to do with Eve being the one the serpent enticed. The Bible clearly states that Eve was tempted by the serpent and never was there any mention of Adam talking to the serpent.

I enjoy Biblical fiction but not when it completely rewrites the story in a way where facts that are important have been embellished in a way that is almost a fantasy. I can appreciate the imagination that an author has while writing  a story ; so in  that aspect the author has achieved his goal.. The author does portray the serpent pretty close to what the Bible describes but again I don’t think Eve looked to Adam to give the final say in eating  the forbidden fruit.

There are a few things I did like about the book. I like that the author reminds us that God never goes back on His promises . He will never leave us nor forsake us. He wants us to repent of our sins but He gives us free will. We decide if we want to ask for  forgiveness and feel the unconditional love of The Heavenly Father. Perhaps I am being too hard and not appreciating what the author wanted to do with this story. After all it is a fictional account of Eden. I can’t recommend this book, but I always want readers to decide for themselves. 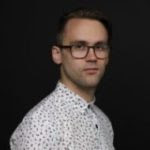 BRENNAN S. MCPHERSON writes epic, imaginative biblical fiction with heart-pounding plots and lyrical prose, for readers who like to think biblically and feel deeply. He lives with his wife and young daughter in the Midwest, and spends as much of his spare time with them as possible.

In my beginning was not darkness, but Light.
As I opened my eyes for the first time, I saw dust motes swirling around five bright points. I reached for them and realized the dust was not blowing past me but instead settling across the complex shapes in my arms.
Distracted, I twisted my wrist, seeing muscle, tendon, bone, and a partial layer of skin. Clenching my fingers one by one, I saw the movement in my joints.
Fascinated, I watched as a swathe of dust poured over me like a sheet of silk and morphed into smooth, brown flesh. I ran my fingers across my new skin, and when the sound of shifting sand settled, noticed what sounded like gentle Music riding on the breath that flowed into me.
I inhaled.
Exhaled.
Inhaled again.
“Adam,” I said, for I had heard that name—my name—in the Music.
I realized that my Father was singing over me, and in his singing, he had given me life and form, and had named me Adam.
He smiled at me, with those dark brown eyes, and let soft melodies fall from his tongue as I lay on my back.
He lifted me from the mud and burned the remaining dust from my skin with the heat of his presence. But he did not hurt me as a natural flame might. Instead, he filled and cleansed me. And the joy of him filled me with an insatiable desire to experience everything around me, to understand the world he had sung into existence.
I’ve never since felt so whole as I did with him in Eden. Because inside me was nothing that did not belong. Only him, and the breath he gave, and the Music he sang, and the smells of Eden, and the touch of his Light, and the taste of his name on my lips as I spoke for the second time. “Father.” I smiled and laughed.
He stood magnificent, warm, compassionate. The image of the invisible condensed in a life foreknown before the foundations of the world were formed.
I felt his pride over me and laughed again, only now with tears.
My first moments were not like those of a newborn child come from a womb. Instead, they were of a child gone into the womb. Swaddled in the Light of God. Cocooned in his satisfaction.
I was Adam. Man fully formed. Reflection of perfection.
In joy, I fell to my hands and knees and bowed my forehead to the ground. Tears flowed to the soil I’d been formed from. How great! How wonderful this being was who had made me for himself, and who so unendingly satisfied me. Nothing I’ve experienced in my long years could ever make me forget it. That sense of purpose. Of everything being right.
Ah, yes. I see wonder on your face, Enoch, at how tears could be present in a world yet unbroken by sin.
Have you never wondered why the kiss of a lover can bring tears to our eyes? It is because some goods are so great that they must be given vent. For not all tears spring from sorrow. And not all aches are unwanted.
Yet still, my Father lifted me and wiped my cheeks. Then he led me across hills and valleys, puddles and rivers. He pointed at plants and skittering animals and insects, and it seemed as though I could hear the echo of his melodies in their movements.

To celebrate his tour, Brennan is giving away the grand prize package of a “McPherson Publishing bundle”, which includes the following books: a copy of Flood, Babel, the three Psalm Series novellas, and The Simple Gospel book!!
Be sure to comment on the blog stops for nine extra entries into the giveaway! Click the link below to enter.
https://promosimple.com/ps/f8a9/eden-celebration-tour-giveaway
Posted by Deana at 12:33 AM