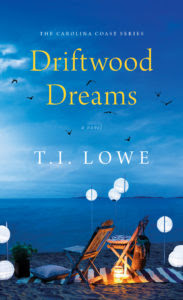 Josie Slater has allowed the circumstances anchoring her in Sunset Cove to become a life sentence. Since her mother’s death years before, she’s spent most of her waking hours helping her dad run the Driftwood Diner. As her best friends, Opal and Sophia, make their dreams come true, Josie watches her own art school aspirations drift on by. But when a French-speaking Southern gentleman from her past moves back from Europe, Josie is launched into a tizzy of what-ifs and I-sure-do-hope-sos.
August Bradford left Sunset Cove six years ago to sow some life oats and conquer his ambitious career goals. Finally ready to lay down some roots, the successful artist is back in town and determined to win Josie’s heart. When he enlists Josie’s help in the preparations for a children’s art camp, Josie finds herself unleashing her artistic side in a way she hasn’t since before her mother’s death. August hopes to convince Josie to paint a life with him, but the problem is convincing her to let go of her apprehensions and give him—and her dreams—a fair chance.

MY REVIEW
Oh my ! This is a wonderful story not just about love but allowing yourself to dream. I’m sure each of us had a dream of becoming something or doing something as we grew up. My dream was to be a teacher and a librarian. I loved being around children and I loved to show children  how fun learning was. Josie reminds me a bit of myself. She has always had a special dream but things always got in the way. There was always someone who needed her help, so she pushed her dreams aside. I discovered while reading the story that part of Josie was afraid to let others down. She felt needed when helping at her dads place, or helping an elderly lady with chores or just sitting and talking with her.
It was hard for both Josie and her dad when her mother died. That void was hard to fill. I’m not sure she let  herself grieve because she was so focused on making sure her dad was okay. They have a great relationship as father and daughter but Josie senses something is off with her dad. I loved reading how much Josie’s dad wanted her to fulfill her dream but he needed to tell her that he would be fine . I kept hoping that Josie would open up to her dad. Maybe she was afraid she wouldn’t be needed or loved.
August is one of those guys you just instantly like. He is charming, sincere and has a gift that he wants to share with others. I loved reading about the camp and how much August was devoted to helping it achieve. He made me think of my husband in so many ways. My husband is a very talented artist. He has air brushed murals for churches and homes. He always wanted to be an artist, but let his dream slip away when his parents didn’t support him. August sees the gift in Josie and wants her to allow herself to dream and see it happen.
I was very impressed with the writing and how easy it was to fall in love with these characters. The author delivers a touching story of following your dreams and never giving up. As for me, I did become a teacher but not the kind I though I would be. I was the Children’s Pastor of our church for many years.  I also was a librarian for fifteen years. My husband continues his dream today as he is often asked to do murals for churches and other things like design T-shirts or paint a mural for a nursery. The story for me was personal because August like my husband supported Josie and never gave up. He encouraged her and rejoiced with her as she allowed herself to let go and trust God.
I received a copy of this book from Celebrate Lit. The review is my own opinion. 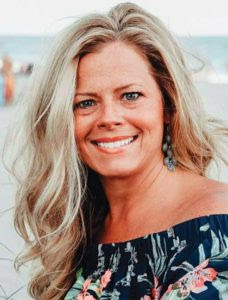 Tonya “T.I.” Lowe is a native of coastal South Carolina. She attended Coastal Carolina University and the University of Tennessee at Chattanooga, where she majored in Psychology but excelled in Creative Writing. In 2014, Tonya independently published her first novel, Lulu’s Café, which quickly became a bestseller. Now the author of 12 published novels with hundreds of thousands of copies sold, she knows she’s just getting started and has many more stories to tell. She resides near Myrtle Beach with her family.

Josie’s reverie came to a screeching halt as the screen door squeaked open and ushered in not only a briny breeze, but also a vision from her past.
With a pronounced air of confidence, August Bradford walked over to the counter and halted in front of a dazed Josie. Her heart jolted at the sight of him, something only this man could elicit. He spoke—or at least his lips moved—but she couldn’t hear anything over the roar suddenly residing in her eardrums.
The Knitting Club’s table kicked up in volume, sounding like a bunch of hens clucking away, but there was no focusing on what they were clucking about either. She knew the answer anyway and had a feeling their timing wasn’t coincidental. All Josie could do was just stand there and stare, as if looking into his silvery-blue eyes had turned her to stone. With a hint of purple near the center, those uniquely hued eyes were made to belong to an artist such as August Bradford. The thick fringe of black eyelashes only emphasized their beauty. It was enough to spawn jealousy in Josie, her own fair lashes barely visible, but it didn’t. It only tempted her to stand there and stare unabashedly. Mouth agape, that’s exactly what she did.
“Are you okay?” A throaty voice penetrated the roar in her ears as a hand waved in front of her face.
Oh, my . . . that voice . . .
The words simply wouldn’t come—only pitiful squeaks of breaths escaped—so Josie did the only thing to come to mind. She hightailed it into the kitchen.

To celebrate her tour, T.I. is giving away the grand prize package of a $25 gift certificate to the bookstore of his or her choice and one copy of Driftwood Dreams!!
Be sure to comment on the blog stops for nine extra entries into the giveaway! Click the link below to enter.
https://promosimple.com/ps/fd05/driftwood-dreams-celebration-tour-giveaway
Posted by Deana at 12:01 AM