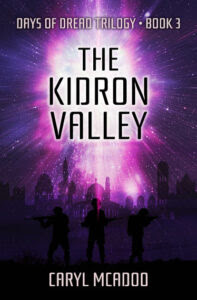 For I will gather all nations against Jerusalem to battle.As evil heightens all over the world, Jackson, his best friend Al, and his girlfriend Aria learn to live in their new world, fighting off those who would kill, steal, and destroy family and neighbors in Red River County. The story is one of survival under the guidance of Uncle Roy and his brother and God’s Words of Knowledge and angel unaware. No one discounts the Great Pyrenees Boggs’ part either. Though Jackson still holds fast to his agnostic beliefs, God keeps making it harder for him to deny His existence and the sacrifice of His Son. Will he finally believe? 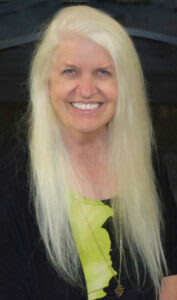 Award-winning author Caryl McAdoo prays her story brings God glory, and her best-selling stories—over sixty published—delight Christian readers around the world. The prolific writer also enjoys singing the new songs the Lord gives her; you may listen at YouTube. Sharing four children and nineteen grandsugars (three greats), Caryl and Ron, her high-school-sweetheart-husband of fifty-three years, live in the woods south of Clarksville, seat of Red River County in far Northeast Texas. The McAdoos wait expectantly for God to open the next door.

Back in the day (2012), after my agent Mary Sue McAdoo Seymour had my first historical romance VOW UNBROKEN under contract with Simon and Schuster, but before its publication, she received a request for a mid-grade dystopian and asked if we—my husband and cowriter—wanted to write one.

We kicked it around and came up with an idea for THE KING’S HIGHWAY. Her client rejected the idea of an end times story for so young an age, but the ZonderKidz editor I pitched to at ACFW loved it! She updated me later it was going to committee.

Next thing I knew, doctors diagnosed her with a terrible disease, and she left the company before it was approved. Time marched on until I decided to publish it myself after we went Indie in 2015. By then it would be the Days of Dread Trilogy: THE KING’S HIGHWAY, THE SIXTH TRUMPET, and THE KIDRON VALLEY!

Those who read book one loved it! New to Indie publishing, I bit off almost more than I could chew that first year—eleven new titles! Between getting all those to market and writing sequels to my historical romance family saga, I never got around to write books two and three!

Fast forward to 2021. It appears the dominoes are falling; signs of the Apocalypse are coming more frequently, so we decided to get to THE SIXTH TRUMPET which debuted in June, followed with the release of THE KIDRON VALLEY in November!

I never planned to include all the Bible’s graphic descriptions of the Battle of Armageddon—it is mentioned, but I downplayed but it. While some soft-pedal the tribulation, I believe many of His children will live through it. I hope to bolster my young readers’ faith to be able to trust God for their protection and provision.

In the Days of Dread stories, I used dreams and visions to put my hero and some of his friends in that final battle without predicting any specific time—only Father knows the day and the hour! I believe, as Jackson discovers, there will be places of refuge where those who follow God ban together for mutual protection and benefit.

it’s so pleased me that many grandparents love these books as well. One read it twice, back-to-back because she loved it so much and didn’t want it to end! Though rampant evil throws the world into chaos, I believe His Chosen will walk in power and peace, spreading His Good News to the lost until the end!

The author has delivered a story that delves into the end times. With plenty of action, danger and intrigue this is the perfect story for teens and young adults. It shows how a group works together to keep each other safe in the world of chaos.

The people have gathered in the camp to watch each other’s backs and welcome outsiders cautiously. You have to wonder who may slip in to cause destruction. It was shocking how quickly people who broke the law were dealt with. It reminded me of the Wild West at times when someone is hanged in the story. The story keeps up a good pace with the camp securing their territory and being on guard at all times. I thought the way the author used faith in the story was very good. There is a struggle with believing in God for some, but with near misses and prophetic dreams it was becoming hard for them to deny that God was in charge.

The ending was powerful and I liked how it illustrated what the Bible says will happen in the last days. It gave me chills as I read “Salvation rides on a white stallion in the sky.”  There was evidence of who was in charge and I think in that moment those that doubted  became believers.

Because I said so — and other adventures in Parenting, January 20

Cats in the Cradle Blog, January 24

For the Love of Literature, January 25 (Author Interview)

To celebrate her tour, Caryl is giving away the grand prize of a $25 Amazon gift card!