Book: To Belong Together

Fame and money have a way of complicating love.

Drummer John Kennedy can keep a beat, but he can’t hold a conversation, so he relies on actions to show he cares. Unfortunately, when he’s instantly intrigued by a spunky female mechanic, he can’t seem to convey the sincerity of his intentions. And the rejections don’t stop there. His own sister is pushing him away just when he could help her most. Erin Hirsh’s life would be easier if God hadn’t given her a love for cars. Only her father understood her, and she’s losing him to dementia. Her brief romances have always backfired worse than a mistuned engine, and she refuses to give John the chance to wreck her heart. A rock star with a supermodel ex can’t possibly see anything in her.

At least that’s what she thinks until they find common ground in faith and their worsening family situations leave them each longing for a place to belong. Could God intend for this pair of opposites to belong together?

To Belong Together is the second book in the Rhythms of Redemption Romances. The men of the rock band Awestruck have conquered the music industry, but to find redemption and love, they must each face the wounds of the past. Good thing no one—and no difficult situation—is too much for grace.

Emily Conrad writes contemporary Christian romance that explores life’s difficult, but relevant, questions. Though she likes to think some of her characters are pretty great, the ultimate hero of her stories (including the one she’s living) is Jesus. She lives in Wisconsin with her husband and their energetic coonhound rescue. She is the author of the stand-alone novel Justice and the Rhythms of Redemption Romance series, as well as a series of short stories, which she emails in installments to subscribers. Learn more about her and her books at emilyconradauthor.com.

On the surface, this is a simple question, but as it kept popping up in To Belong Together, I realized my characters kept asking it because their answers left them unsatisfied and insecure.

(Which is writer speak for: My brain kept circling back to the question because God had something to show me!)

At first, the answer for John seems to be that he’s a famous drummer. For Erin, it’s that she’s her father’s daughter (her father instilled her love of cars).

I’m sure you have a way you describe yourself too.

These easy answers are helpful in conversation. In fact, I’d love for you to comment on this post with your answer, because it’s a point of connection with people we’re getting to know, and I love to get to know readers and other writers!

But, as I was writing To Belong Together, I realized anew that these things are not our identities. They are roles—roles we play in relationships, in our jobs, in our hobbies. Because a role is not the same as an identity, it can’t provide the lasting purpose, worth, and security we crave.

As believers in Christ, our eternal identity is that we are beloved children of God.

Because our roles take so much of our time and energy, and because they really do serve a purpose in conversation when we’re meeting someone new, I think it’s easy to lose sight of that greater identity.

At least, I know John and Erin struggled with it. (Again, writer speak for: I needed some reminders in this area!)

If you read To Belong Together, I hope you enjoy seeing that theme pop up throughout the novel and come away with a greater understanding of who you are in Christ. After all, that identity makes all the difference as we fill those beloved roles God’s blessed us with.

If you have a minute to introduce yourself in comments, I’d love to meet you!

This is one of those stories that is a perfect example of opposites attract. I love how the author shows two characters from different lifestyles try to form a relationship. Erin is my favorite character because she is strong, independent and loves her family. As a woman who works on cars for a living she has this stigma placed on her. She was always helping her dad work on cars so it seemed natural that she would do it as a profession. Not everyone accepts her but she knows her dad supports her. As she faces him becoming less of himself due to dementia the memories are more precious to her now. Adding  to her worry is the realization that her parents may lose the home they have lived in for so long. How can she find a way to save their home and keep her dad in the place he feels most connected to?

John has one of those professions that  others envy. Being in a famous band as a drummer  has skyrocketed his fame and he finds it hard to not be noticed in public. I did chuckle when he brought his car in for service at the shop Erin works out. She has no idea who he is and that may have shocked his ego a bit. One thing the  author illustrates with John is the turmoil going on with John and his sister. His  faith for some reason doesn’t sit well with his sister and their relationship holds on by a thread. I sympathized with John as he is removed as a groomsman in his sister’s wedding. The bitterness she has towards him makes me wonder what she holds against him.

The story is very emotional as Erin and John try to fit in. They each have doubts that  they are accepted by others and this causes a problem between the two of them. I see pride peeking through their relationship as well as trust issues and communication. If only they could see that God loves them and is accepted by Him. How many of us have this need to feel accepted? Do we have problems expressing how we feel? Do we feel unwanted and not worthy? The word rejection   plays a big part  in Erin and John’s life. They both are afraid of rejection so they find reasons why relationships go wrong. They don’t want to open their heart because fear keeps them in chains.

I loved how the author gives readers an inside look at the struggles people face with insecurity and trust. We get so caught up in what other people think about us, we forget that God loves us unconditionally.

Because I said so — and other adventures in Parenting, October 3

For Him and My Family, October 5 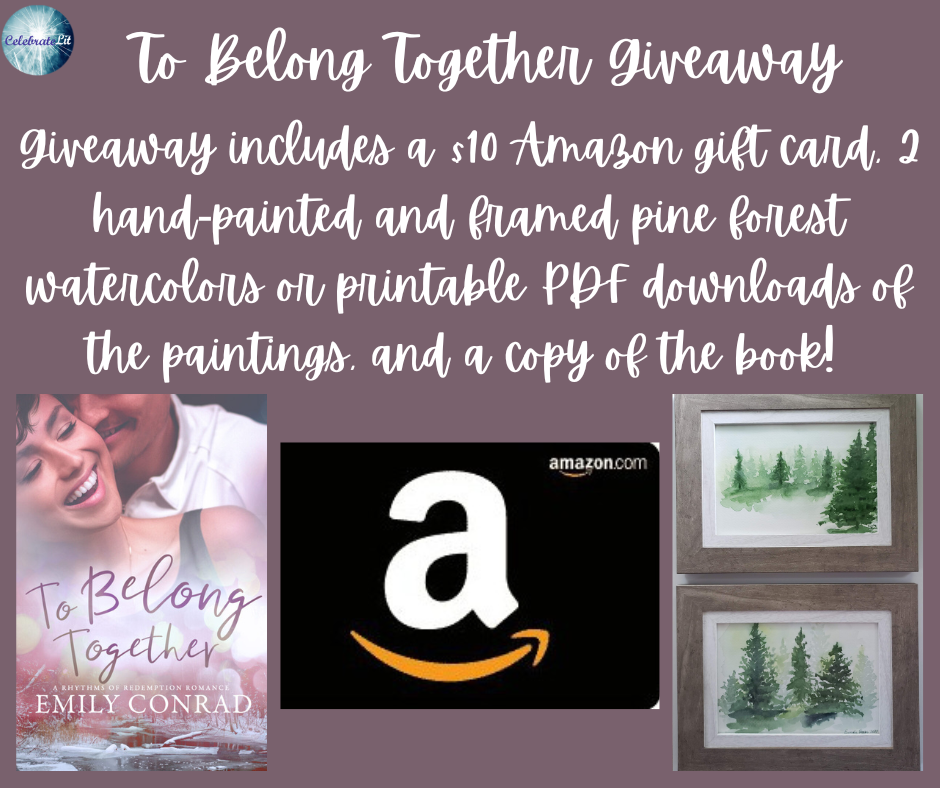 To celebrate her tour, Emily is giving away the grand prize package of a 10 Amazon gift card, an electronic copy of To Belong Together, and 2 hand-painted and framed pine forest watercolors (US Only) or printable PDF downloads of the paintings (International)!!