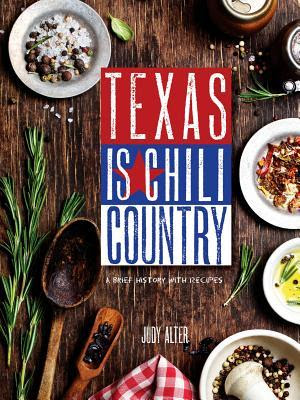 Texans love to eat, and one dish they can’t get enough of is chili—so much so that chili con carne is Texas’s state meal. This seemingly simple staple of Texan identity proves to be anything but, however. Beans or no beans? Beef, pork, or turkey? From a can or from scratch?

Texas Is Chili Country is a brief look at the favored fare—its colorful history, its many incarnations, and the ways it has spread both across the country and the world. The history includes chuckwagon chili, the chili queens of San Antonio, the first attempts at canned chili, the development of chili societies and the subsequent rivalries between them, and the rise of chili cook-offs.

And what would a book about chili be without recipes? There are no-fat recipes, vegan recipes, and recipes from Mexican-American cooks who have adapted this purely American food. Some have been tried, but many are taken on faith. Recipes are included from state celebrities such as Ladybird Johnson, Governor Ma Ferguson, and chili king Frank Tolbert.


What a fascinating book I found this to be. Since I am a native Texan , I thought I knew everything there was to know about chili. But as I began the book, I found facts I didn't know about chili and enjoyed learning about the history behind chili. The most famous and granddaddy of all chili cook offs is held in Terlingua. It is a small town in West Texas and people come from all over to participate. The author says, "Chili probably first appeared publicly in San Antonio in the 1880s, although it may have been earlier."

It's hard to believe that at one time chili was not popular and some called it the, "Soup of the Devil." What were people thinking? I'm glad that controversy is over.  Who doesn't like a nice hot heaping bowl of Texas chili? Gebhardt in San Antonio was the first to produce canned chili way back in 1908. There are facts showing that Gebhardt started making chili in anew Braunsfel and then moved his company to San Antonio. When chili powder was invented in 1896, housewives were able to make their own chili right in the comfort of their own kitchen.

I'm sure many of us know who the best known chili is. It has become a staple for msnt of us in cold nights as we warm up with Wolf Brand chili. Did you know that the formula for this famous chili is still a company secret even today? I also found out while reading that chili is the official state food of Texas. If you visit Texas, you must make one if your meals Texas chili. There us nothing like it and you will not be disappointed.

The book has many historical facts about chili and the men and women who helped make it famous. It is a must read for all chili fans as the book also contains chili recipes that everyone will love.