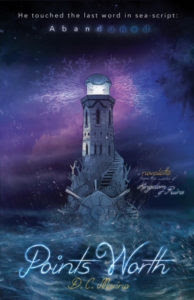 Title: Points Worth
Author: D.C. Marino
Genre: Fantasy
Release Date: March 30
For centuries the small port town of Points Worth has been able to communicate with the ocean in its own language. But the water has just gone silent and its last word has shaken those able to translate it. A knowledge of sea-script won’t be enough to mend the broken relationship between man and the deep. Gil, a young nautical linguist, will have to break rules and search the past to discover why the ocean ceased its tides—or had them stolen.
Points Worth is a novelette set in the world of Kingdom of Ruins, and is a prequel to the first book in the series. 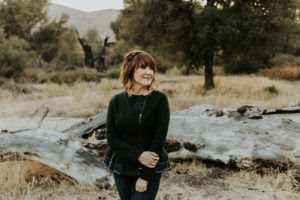 D.C. Marino is a dedicated reader of history books and fantasy novels, both of which occupy an equal amount of space on her bookshelves. But it wasn’t until she realized how one breathed life into the other that she became addicted to finding the intersections of the real world and the fairy story. Still more: what those intersections about us as a creative, curious people. Kingdom of Ruins is her debut novel.

Hi Everyone!
I’m so excited to celebrate the release of Points Worth with you! To start, I’ll share a funny secret: this little novelette was never in the plan. The idea came at the last moment, at the suggestion of my publisher. I had never intended to write a prequel to the Kingdom of Ruins series, but when I began fleshing out this small story, it took on a personality I couldn’t ignore. Not only did I fall in love with the sea-salt setting and gutsy characters, but Points Worth is now planned to continue as a mini-series of novellas, each one to be released between the full-length novels!
Gil, the main character and hero, is who I blame for the speed of my commitment to this storyline. He inspires me. Calamity has befallen his small port town and fear is driving even the wisest of the townsfolk to make dangerous decisions. Instead of swallowing the easiest explanation for the disaster, Gil goes in search of the truth against one of the most powerful men in the town. He’s scrappy, inventive and knows his history. Though born in the hills, he’s a natural seafarer. I wanted to keep following him right off the page. And so, his story has only just begun to sail the unknown ocean.
On the flip side, the Kingdom of Ruins series takes place on land. But this isn’t a default setting. The land is a character in itself and interacts with those that live upon its soil. It even takes sides in war. This same concept was extended to the sea in Points Worth. Which is appropriate, as they are part of the same world. In fact, the town of Points Worth is only a few days’ ride away from where the main novel takes place. Which leads me to the last thing I wanted to share with you. Gil will show up as a supporting character in one of the main novels. I love this because, though the reader will know Gil very well, the main characters in Kingdom of Ruins will not. You’ll suddenly see Gil from another’s perspective, which should be interesting and sometimes comical.
I will say no more. Land and sea must tell the rest of the story.
Thank you for coming! I hope you enjoy the ocean-air and the adventure it inspires!
D.C. Marino

The saying, "Good things come in small packages," is what this treasure of a book is. I love the sea and all the mysteries that can be found there. The waves seems to talk to you as it crashes on the rocks. What happens when the sea becomes quiet? Gil is a wonderful character who loves the sea and feels it talking to him. When he discovers that the sea is in trouble, he can't find anyone to believe him.

Gil wants to warn others but they dismiss him as a silly person who doesn't know what he is talking about. I loved how the author took us on a journey to find out what Gil could do to help the sea. Will he be able to get anyone to listen to him? I'm thrilled to know that there will be more installments in this exciting adventure . I look forward to the next book as I am left intrigued by what the sea is trying to communicate.

To celebrate the tour, Celebrate Lit is giving away a grand prize of a $25 Amazon gift card!!
Click below to enter. Be sure to comment on this post before you enter to claim 9 extra entries! https://promosimple.com/ps/cece/points-worth-celebration-tour-giveaway
Posted by Deana at 2:03 AM