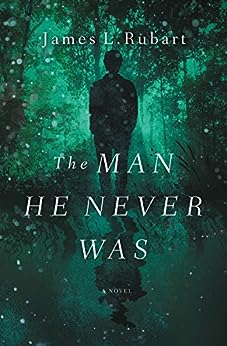 THE MAN HE NEVER WAS by
JAMES L. RUBART

This book had me creeping out at times. The writing is so vivid I could feel the inner turmoil Toren felt every waking moment. I have been disoriented when waking up at times, but never have I woken up and not known where I was. He does remember his life as a husband and father, but his memory has been erased for the last eight months. This is about the time I would be having a panic attack and dialing 911. I'm not sure that would be the best idea, but really I'm not sure what I would do if  I was Toren.

This story had me on the edge of my seat anticipating the next twist in the story. How could you be gone for a length of time and not recollect anything?  Have you ever felt like there was a darker side to you? In the classic Rubart style he threads a Jekyll/Hyde theme that breaks the barrier between good and evil.

Toren wrestles with himself as he discovers how dangerous his anger has become. What happened to his football career? Can Toren recover his life and become a better person? I must mention the friction between him and his wife. What great writing the author achieved showing their love/hate relationship. It would be so hard to forgive Toren for his behavior but can he change his wife's mind? Will Toren find strength to fight the evilness inside of him? There is much to gleam from this story of hope and redemption.

I received a copy of this book from The Fiction Guild. The review is my own opinion.