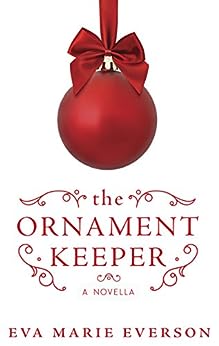 This is one of the classiest, emotional and pivotal books about Christmas and family I have ever read. It drips with poignant moments that caught me off guard. We all have been there at times in our marriage where we become unhappy but don't quite know why. Our lives seem happy with healthy children, a lovely home and a marriage that has endured loss and triumph, but we feel empty inside.

I adored the significance of the ornaments in the story. It told in compassionate detail every important moment shared between Felicia and Jackson as they married and raised a family. There is a point in the story that made time stop for a minute. Felicia senses she is unhappy but blames everything else but the real reason she is sad. Maybe it was the realization that she hadn't forgiven herself for something that happened in their past. Does she blame Jackson for not allowing her to pursue her dreams?

On this Christmas of 2018 everything has changed in the family. Christmas was always special because Jackson gave a special gift to his wife every year that spoke to their hearts. Will it happen this year? How did they drift apart? The story is of two people trying to find their way back to each other and along the way experience Christmas like never before. The reference to Mary and Joseph in the story is very significant and it brings deep feelings to Felicia. I cried throughout the book as it really hit home for me.

It has been so hard all these years for me to enjoy the holidays. My childhood was filled with violence and abuse. Christmastime was the worst because I never once received a present my entire childhood. My brothers were blessed with gifts but I had to sit and watch them open them. When I became a mother I did everything I could to make sure that my children had a good Christmas. I put on a good front, but inside I cried for that little girl who wanted a doll and stuffed animal so bad. Over the years I gradually have begun to forgive my parents. What spoke to me the most in this book is two things. The first was how Felicia forgot to forgive herself. That was so powerful and  something we often overlook.  Thank you for reminding me that I still need to work on that myself. The second thing is how blessed I am to have a man who has stood by me all these years and showed nothing but unconditional love. Felicia didn't understand what she had in Jackson until it was almost too late. I loved when Jackson told Felicia, "I've been in love with you since high school." Jackson and Felicia have each realized they need to work on their marriage and communicate. Will they be able to safe their marriage? Can they remember those special moments at Christmas that are shared with a small gift so precious it reaches into their soul and brings hope? Jealousy and trying to get approval from your parents can stay with you for a long time. Will Felicia and Jackson be able to accept that God is proud of them?

This story will need to be read with tissues handy as you read about a family that goes through trials and leaves you with hope, and a feeling of God's love as He wraps His arms around you. He reminds us that we should treasure our memories and love each other like he loves us.

"The wounds of unforgiveness are not healed at once, but by the proper application of love and time."

I received a copy of this book from the author. The review is my own opinion.
Posted by Deana at 4:57 AM