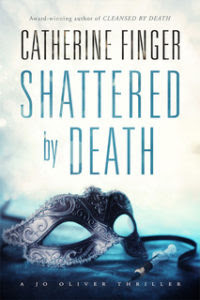 When Josie’s abusive soon-to-be-ex-husband had an affair with another woman, Josie could have murdered them. When someone does, Jo is the prime suspect and the only one who can solve the case.

This author is at  the top of my list for suspense writers . She easily puts faith elements throughout the story in very specific places that heighten the character’s flaws. I had to stop in the middle of reading the book to jot down notes. I didn’t want to forget anything that I felt were important for readers to know.

You can read the back cover and find out what the book is about. I want to highlight Josie so that readers will understand how powerful this story is. Josie is the chief of police and you could tell some people were not excited about her position. There is a definite power struggle between two women that really showed how catty females can be. Can’t we just celebrate when a woman is in authority instead of that ugly green eyed monster showing up? I have worked at several places were there was nothing but drama between the women. I wanted no part of it and refused to play into their hands.

Josie has a moment when she feels helpless and the enemy whispers in her ears  to end it all. That one scene gave me chills as she cries out to God to save her, to take away those thoughts running through her mind and rescue her from evil. The author wrote it so well I could see it playing out right before my eyes.

She is in a fight for survival when fingers point to her as guilty. Who would kill her soon to be ex-husband and his mistress? The crime scene is a bit graphic but I understood why the author wrote  it that way. The question arises of why someone wanted to brutally murder two people? I began to think that someone was very angry and it showed in the way the people died.  There is definitely a battle between light vs darkness in this story. Will there be more murders? Can Josie find the killer while trying to keep her private life  from being poisoned by evil?

I was glued to my seat and only stopped to take notes. This is a story that takes readers inside the mind of evil and wraps itself around people to destroy them. Josie will need to continually cover herself in prayer as she battles against something only God can save her from. Will Josie learn to surrender all to God and trust Him even in her darkest hour?

Catherine Finger loves to dream, write, and tell stories. Recently retired from a wonderful career in public education, she celebrates the ability to choose how to spend her time in a new way during the second half of life. So far, she chooses to write books, ride horses, serve others, and generally find her way into and out of trouble both on the road and at home.  She lives in the Midwest with a warm and wonderful combination of family and friends.
Capsized by Death, the fourth novel in her Jo Oliver Thriller series, will be released by Elk Lake Publishing in November 2019. Anchored by Death, the third of her Jo Oliver novels, was a Bronze Medal winner at the 2018 Independent Publisher Book Awards; a 2018 Selah Awards finalist; and a finalist for the National Indie Excellence Awards. Her second Jo Oliver Thriller, Shattered by Death, was a finalist in the International Book Awards and the National Indie Excellence Awards. Catherine and her novels have been featured on radio stations, blogs, and in numerous articles—all posted at www.CatherineFinger.com.
Catherine loves to interact with her readers at www.CatherineFinger.comFollow her on Facebook at Catherine Finger, Author, and on Twitter at CatherineFinger@BeJoOliver.

“If you could kill someone and get away with it, what would you do? How would you do it?”

Having posed this question over dessert during a really good first date several years ago—to my surprise and delight my date proceeded to share a story about an international cosmetic gone badly awry. I was so taken with this story, that I couldn’t wait to get home and start writing. And I did. That night I sat down to write a scene between two powerful women, intending one to toy with the other by playing with a jar of deadly moisturizer as they interacted.

As I wrote that night, an unexpected scene involving spiritual warfare popped into my head and onto the screen. The edgy, scary, lock-your-doors-before reading story I called Shattered by Death was born.

While the moisturizer scene didn’t ultimately stay in the book, the idea of powerful women pitted against each other did. I strive to create antagonists that are as strong—or stronger—than Jo Oliver. When I feel the tension of wondering whether or not Josie is going to make it out alive—that’s when I know I’m in the middle of a great story.
I hope you think so too.
Enjoy the read!
Catherine

To celebrate her tour, Catherine is giving away the grand prize of a $25 Amazon gift card!!
Be sure to comment on the blog stops for nine extra entries into the giveaway! Click the link below to enter.
https://promosimple.com/ps/fb4f/shattered-by-death-celebration-tour-giveaway
Posted by Deana at 1:04 AM