Book:  A Tapestry of Light 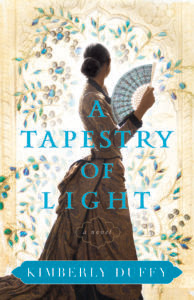 Ottilie Russell is adrift between two cultures, British and Indian, belonging to both and neither. In order to support her little brother, Thaddeus, and her grandmother, she relies upon her skills in beetle-wing embroidery that have been passed down to her through generations of Indian women.

When a stranger appears with the news that Thaddeus is now Baron Sunderson and must travel to England to take his place as a nobleman, Ottilie is shattered by the secrets that come to light. Despite her growing friendship with Everett Scott, friend to Ottilie’s English grandmother and aunt, she refuses to give up her brother. Then tragedy strikes, and she is forced to make a decision that will take Thaddeus far from death and herself far from home.

But betrayal and loss lurk in England, too, and soon Ottilie must fight to ensure Thaddeus doesn’t forget who he is, as well as find a way to stitch a place for herself in this foreign land. 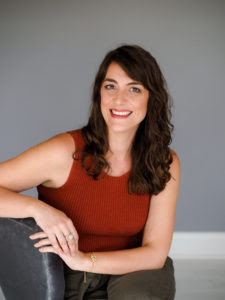 Kimberly Duffy is a Long Island native currently living in Southwest Ohio, via six months in India. When she’s not homeschooling her four kids, she writes historical fiction that takes her readers back in time and across oceans. She loves trips that require a passport, recipe books, and practicing kissing scenes with her husband of twenty years. He doesn’t mind.

When I set out to write a new novel, I plan the entire thing from start to finish. I write down each scene on an index card and know exactly what’s going to happen when I sit down for the day’s work. I’m meticulous that way.

But I never plan my characters’ spiritual arcs. Because I want their faith journey to be organic to the story. I want it to feel authentic. It’s such an important part of each of my books and I recognize that some things just refuse plotting and need to develop in a more natural way.

My debut novel, A Mosaic of Wings, features a heroine steeped in science. Nora loves the natural world and so her faith was encouraged by studying the wings of a butterfly or examining an interesting plant. She’s not particularly sentimental or emotive so the faith element of that story had to be presented in a way that made sense for her. Nora’s faith arc is subtle.

Not so for A Tapestry of Light. I had no intention of writing a book that delved into my own struggle with doubt. But that’s what Ottilie required. And it wrung me dry.

Then built me back up.

My faith story is a twisted kind of one. Raised a Christian, I went into ministry, firmly attached myself to the faith of my childhood, and thought it would never waver.

Oh, how it wavered. For whatever reason, when I hit about 30, it seemed everything I had always believed no longer made sense. It was devastating. Terrifying. And it broke me.

But brokenness is its own sort of beauty and when you recognize there is no way for you to pick up the pieces yourself, God can come in and fill those cracks and shattered places.

Those five years of doubt and questioning and facing the reality that even though I’d always loved Christ, I didn’t really know Him (and didn’t really know why I believed in Him), were some of the most painful I’ve experienced. But I believe with every bit of my being that God is in the business of redemption. Of restoration. Of filling up so that we can pour out.

And he took my own very personal struggle and helped me turn it into a story that, I hope and pray, might encourage others. I gave Ottilie my questions. I gave her my doubt. I gave her my fear and desperation and, in the end, I gave her my hope.

There’s a little piece of me in each of my books, but this one contains my heart.

This has been an epic journey with a character that I immediately liked. It was easy to like Ottilie with her compassion for her brother and her heritage. The author explores how difficult it is to fit in when you come from a different region. I loved learning  about the Indian  culture and the beautiful garments the women wore. It broke my heart when Ottilie was shunned by so many because of her heritage.

When she travels with her brother to England I hoped things would improve for her. She finds herself struggling to be accepted and the rejection is overwhelming. The story reminds us what others feel when they are judged by their religion, culture or looks. I could feel her pain each time a cruel word was said to her or when she was rejected by members of her own family.

I enjoyed learning about the craft of embroidery and the intricate details that make a garment beautiful. Ottilie is very gifted and I think that gave her a little boost to her ego. Her heart was broken at times and I enjoyed the depth the author took Ottilie as she struggled  with her faith. As her heart pours out to Jesus you can sense her surrendering and finding peace. There are many secrets that are exposed in the story which cause a little chaos and trust issues. Overall I loved the story and the lessons on allowing God to comfort you, having faith and knowing that you are never alone.

“Sometimes, when we are most alone, the God who sees and knows is closer than ever.”

Through the Fire Blogs, March 27

Reflections from my bookshelves, March 31

For Him and My Family, April 2

Labor Not in Vain, April 6

She Lives To Read, April 7

To Everything There Is A Season, April 8

To celebrate her tour, Kimberly is giving away the grand prize $25 Amazon gift card along with a signed copy of either A Mosaic of Wings or A Tapestry of Light!!