Book:  The Sword and the Secrets 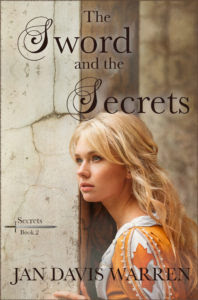 When Julianna’s final mission proves more deadly than she imagined, help comes from the most unlikely of places.

Raised in a castle on the remote border of England and Scotland, Lord John Stanton is the last male heir of his royal lineage. He has the responsibility to marry and carry on the family name, but a secret vow to God, after a near-fatal battle wound, could change his future from royal heir to humble servant of the church. His journey to the monastery to become a monk is interrupted when he meets a dangerous, but beautiful, woman who has plans and secrets of her own.

Abandoned by her father and raised in an institution as property of the Crown, Julianna Westerfield longs to be free to pursue love and have a family of her own. Trained to be a spy and assassin, she has a chance to earn her freedom by completing this last and most dangerous assignment. Her mission to uncover a murderous plot and the identities of the Black Guard has already cost several agents their lives, and now the assassins are after her. To survive she must depend on a handsome monk and his cantankerous donkey.

Was it divine intervention that caused John and Julianna’s paths to cross? Can they put aside their differences and join forces to deliver stolen papers containing vital information to the king in time to save countless lives? 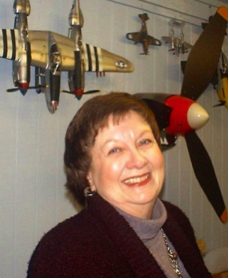 Jan Davis Warren is a mother, grandmother, and a young-at-heart great-grandmother. Her wonderful husband passed away the same year she won the ACFW Genesis Award for Romantic Suspense. That win and many others are encouraging reminders that God wants her to continue writing even in the tough times. Learn more at www.janwarrenbooks.com.

The Sword and the Secrets is a Historical Romantic Suspense. It is written as a Medieval Christian fiction story set in England around 1209. I chose to keep the historical details to a minimum because of the inconsistency I found in researching this particular time and place. I humbly apologize to you lovers of more in-depth historical facts. I would’ve loved to have traveled to England for more hands-on research but the pandemic made that impossible.

I live in a once-rural area in Oklahoma. Urban development is fast encroaching transforming peaceful pastures into busy neighborhoods. I know it’s called “progress”, but I miss knowing all of my neighbors by name. In the good-old-days, my husband and I loved raising our children here on the farm. As a family, we had all kinds of poultry and livestock, so I can’t resist including a variety of animals in my stories from time to time.

Rosita and her daughter, Daisy, were two of our favorite donkeys on the farm. I’ll never forget when Daisy was born. I think her ears were almost long as her legs. Speaking of donkeys, did you ever hear the story about how the donkey got its cross? I included it in the book.

Precious is the name of the donkey in The Sword and the Secrets. Her mother was killed when she was but a few days old, and she was raised by an old woman who took her into her home and treated with the care and affection of the child she never had. Needless to say, Precious is smart and creative when it comes to getting her way. When her elderly master is about to die, the woman is directed by God to entrust Precious into Lord John Stanton’s care.

For the war-weary hero of this story, Lord John Stanton’s secret battlefield vow to serve God and the Church became more complicated when he was charged with the responsibility of caring for the contrary donkey. His intent to walk to London to join a monastery was supposed to be peaceful and most of all, solitary. It wasn’t until after John accepted the animal that he found out that the donkey’s elderly master had taught Precious not to budge unless first called by name. It was to keep her from being stolen, which served her well. But the name sticks in the hero’s throat every time he must submit to calling her Precious to make her move.

John’s plans also never included protecting a beautiful spy with secrets of her own.

The heroine, Julianna Westerfield was a fun surprise to me. As the story took shape in my mind, I thought the hero would meet the heroine by coming to her aid against brigands. Perhaps she was a princess fleeing her wicked guardian, etc. That however was not the way the story unfolded. As I came to Julianna’s part, I realized she had a colorful past of her own.

I love it when the story develops into something I never expected. 

The beautiful heroine of The Sword and the Secrets, Julianna Westerfield is not the princess I first envisioned but an indentured servant. She was abandoned as a child at the Grandfork Institute for Higher Learning. It is an institution run jointly by the Crown and the Church for the sole purpose of training spies and assassins to do their bidding.

I hope you’ll join John and Julianna (and Precious) on their quests and perchance uncover their deepest secrets.

May God bless and keep you and draw you ever closer to Him.

It is a wonderful adventure that finds two unlikely people joining together. I loved how John and Julianna became dependent on each other as they didn’t trust anyone else. The mission is mysterious and dangerous as they travel to their destination. I have to mention Precious who is a donkey. Now this donkey is very important to  the story as John has been assigned to watch over it.

His promise to God is not well known but for John it means everything. I loved the faith element in the  story that weaved in and out of a high octane action packed mystery. I’m not sure how I feel about Theroux and was pretty sure he should not be trusted. Julianne being a spy was quite entertaining as she consistently finds herself in situations that could give her identity away. The exciting part for was me was when they were in the secret tunnels. I would be shaking in my shoes about this time. Can you imagine what lives there among the dark, cold environment? Arriving at the castle proved to be dangerous as they try to identify the Black Guard. Oh my was this an emotional journey as John finds himself questioning if he is doing the right thing.

If you like adventure, swords, castles, heroes and a faith themed story, then grab a copy of this book. The author gives readers much to enjoy in this story that captures faith, trust and honor.

Romances of the Cross, April 30

Adventures Of A Travelers Wife, May 2

Blogging With Carol, May 3

To celebrate her tour, Jan is giving away the grand prize of a $50 Amazon gift card!!