The Debutante's Code by Erica Vetsch // I read with Audra Tour, Review and Giveaway! 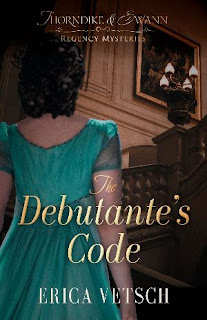 Jane Austen meets Sherlock Holmes in this new Regency mystery series Newly returned from finishing school, Lady Juliette Thorndike is ready to debut in London society. Due to her years away, she hasn't spent much time with her parents, and sees them only as the flighty, dilettante couple the other nobles love. But when they disappear, she discovers she never really knew them at all. They've been living double lives as government spies--and they're only the latest in a long history of espionage that is the family's legacy. Now Lady Juliette is determined to continue their work. Mentored by her uncle, she plunges into the dangerous world of spies. From the glittering ballrooms of London to the fox hunts, regattas, and soirees of country high society, she must chase down hidden clues, solve the mysterious code her parents left behind, and stay out of danger. All the while, she has to keep her endeavors a secret from her best friend and her suitors--not to mention the nosy, irritatingly handsome Bow Street runner, who suspects her of a daring theft. Can Lady Juliette outwit her enemies and complete her parents' last mission? Best-selling author Erica Vetsch is back with a rollicking, exciting new series destined to be a hit with Regency readers who enjoy a touch of mystery in their love stories. Fans of Julie Klassen, Sarah Ladd, and Anne Perry will love the wit, action, and romance. Click here to read an excerpt.
MY REVIEW
This has been quite an adventure into the world of spies. I was thrilled to have Lady Juliette at the center of the story. She is kind and generous and missing her parents. It was strange that they took off so quickly with an excuse that for me sounded made up. There is something lingering in the air that smells like deceit and danger as  Juliette finds her life jumbled up in her Uncle’s questionable actions.
The story moves at a nice pace  and I was intrigued  by the robberies  that took place in places that should have better protection than it did. Who is behind the thefts and why does Juliette seem to always be in attendance with the thefts happen? The author does a great job of leaving hints as to what is happening but I sure couldn’t figure all of it out. I was taken aback when I found out about Juliette parents. How had they managed to keep this secret from their daughter all these years? Now they need her help to protect them and others from being exposed as spies.
I loved how the artwork was used to hide codes that could cost people their lives if they were found out. Decoding is now up to Juliette as she is in danger and forced to help the enemy.
Daniel is a welcome addition to the story as he tries to prove he can solve the case of stolen art and jewelry. He focuses on Juliette and her uncle thinking  they  may be behind everything. He hopes to be wrong because along the way, he has developed feelings for Juliette. It is a great adventure that keeps readers guessing til the end where the author gives us a few surprises. I am hoping she will continue the story in  a new book  because I need to find out a few things about Daniel. I also must know if Juliette and Daniel become more than acquaintances.
I received a copy of this book from Read With Audra Blogger Program. The review is my own opinion. 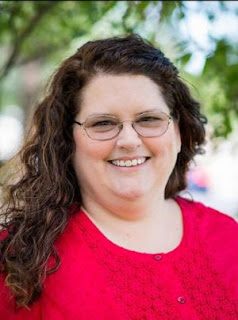 Erica Vetsch is a New York Times best-selling and ACFW Carol Award–winning author. She is a transplanted Kansan now living in Minnesota with her husband, who she claims is both her total opposite and soul mate. Vetsch is the author of many novellas and novels, including the popular Serendipity & Secrets Regency series and the new Thorndike & Swann Regency Mystery series Vetsch loves Jesus, history, romance, and sports. When she’s not writing fiction, she’s planning her next trip to a history museum and cheering on her Kansas Jayhawks and New Zealand All Blacks. Learn more about Erica Vetsch and her books at www.ericavetsch.com. She can also be found on Facebook (@EricaVetschAuthor), Instagram (@EricaVetsch) and Pinterest (Erica Vetsch). 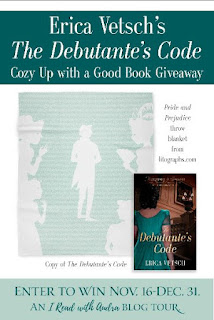