Body on the Bayou
by Ellen Byron

Body on the Bayou is well written and I really enjoyed reading it. I enjoyed the characters
~MysteriesEtc
What’s not to love about book two in the Cajun Country mystery series. Filled with action and humor,drama and witty characters this fast-paced mystery will keep you guessing until the end…
~Shelley’s Book Case
The story moved along nicely and held my interest…If you like Louisiana bayou as a setting and a little romance with your mystery, you’ll enjoy Body on the Bayou.
~Christa Reads and Writes
When you read Ellen Byron’s book, you are transported to Louisiana. I was transported to the beautiful deep south of this charming mystery.
~Bibliophile Reviews
This was a good, fun read! I enjoyed the story, and was caught up in it from almost the beginning.
~The Ninja Librarian 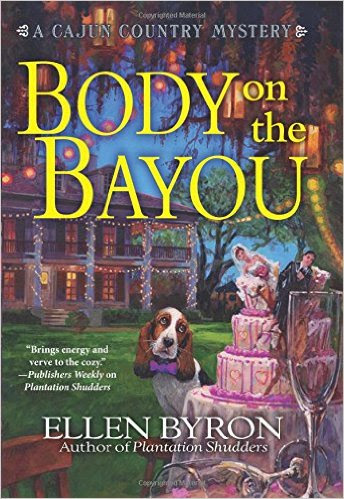 Body on the Bayou by Ellen Bryon

The Crozats feared that past murders at Crozat Plantation B&B might spell the death of their beloved estate, but they’ve managed to survive the scandal. Now there’s a très bigger story in Pelican, Louisiana: the upcoming nuptials between Maggie Crozat’s nemesis, Police Chief Rufus Durand, and her co-worker, Vanessa Fleer.
When everyone else refuses the job of being Vanessa’s Maid of Honor, Maggie reluctantly takes up the title and finds herself tasked with a long list of duties–the most important of which is entertaining Vanessa’s cousin, Ginger Fleer-Starke. But just days before the wedding, Ginger’s lifeless body is found on the bayou and the Pelican PD, as well as the Crozats, have another murder mystery on their hands.
There’s a gumbo-potful of suspects, including an ex-Marine with PTSD, an annoying local newspaper reporter, and Vanessa’s own sparkplug of a mother. But when it looks like the investigation is zeroing in on Vanessa as the prime suspect, Maggie reluctantly adds keeping the bride-to-be out of jail to her list of Maid of Honor responsibilities in Body on the Bayou. 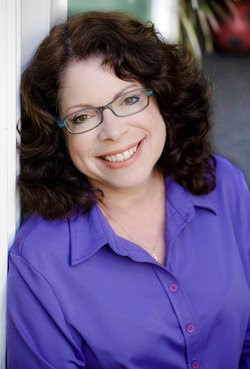 , will be available in September 2016. Ellen’s TV credits include Wings and Just Shoot Me; she’s written over 200 magazine articles; her published plays include the award-winning Graceland and Asleep on the Wind. Ellen Byron is a native New Yorker who lives in Los Angeles and attributes her fascination with Louisiana to her college years at New Orleans’ Tulane University.
Webpage – http://www.ellenbyron.com/
Blog – http://www.ellenbyron.com/#!blog/c1in0
Twitter – https://twitter.com/ellenbyronla
Facebook – https://www.facebook.com/ellenbyronauthor
GoodReads – https://www.goodreads.com/author/show/23234.Ellen_Byron
Purchase Links:
Amazon  B&N

I liked the setting of the story and I really enjoyed most of the characters. I have to say though I was very disappointed in the name of the victim who was killed.  When the character was introduced , she was rude, annoying and everyone hated her. She had a reputation for being nasty and hard to get along with. I would have liked a bit more suspects in  the book and maybe a different victim. When it is obvious after a few pages who is going to be killed, I was a tad upset.

But not to fear, because the author brings a great story with silly happenings, moody people and a bride that needed to take a very long nap. There is a shining star in Maggie. She seems to be running around with her head chopped off trying to please the bride to be. Maggie had more patience than I would have. There is a bit of a romance in the book that has all the makings for a big fight between two families. It's funny how something that happened a long time ago,can  still cause hatred between these families. I did like the Cajun theme and thought the author did a good job on describing the area and food . I can't forget to mention the overbearing utterly mean Rufus. What a big attitude downer he is. Why would anyone want to be his friend? The story is really over the top at times with the wedding preparations and silly things the bride wants. I had to laugh at the shenanigans with the bride and her bridesmaids. I kinda think I would like to see this made into a movie. I have already picked out the actors.

Overall I enjoyed the story and the author did a great job of character development. I guess I was upset at who was killed, because she was such a nasty person. That made me realize how good the author did in writing her character. . I did enjoy the ending though and I will have to read another book from this author because for some reason she has piqued my curiosity.

I received a complimentary copy of this book from Great Escape Book Tours. The review is my own opinion and I was not compensated for it.