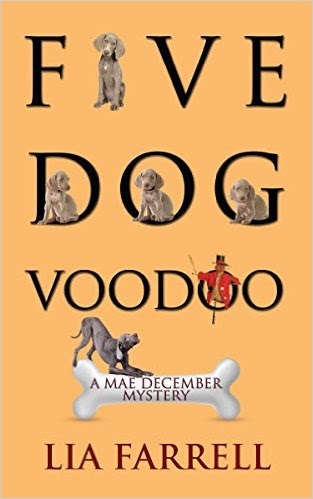 As Halloween approaches, engaged couple Mae December and Sheriff Ben Bradley have devoted all their energy to Ben’s campaign for reelection as sheriff of Rose County, Tennessee. The race is already too close to call when the sheriff’s office is hit with yet another maddeningly tricky murder case. In recent years the town of Rosedale has had more than its fair share of murders, a fact Ben’s smarmy opponent is all too eager to exploit.
Investigator Dory Clarkson and her friend, Counselor Evangeline Bon Temps, are visiting the mysterious Voodoo village when a resident tells them her granddaughter, Zoé Canja, is missing. Her dog, a Weimaraner nursing four pups, escapes the house and finds the young woman’s body in a shallow grave. Evangeline becomes Sheriff Ben Bradley’s unofficial consultant because her grandmother in Haiti and later her mother in New Orleans practiced Voodoo. A threatening symbol is left on the pavement by Dory’s front door, effectively banning her from the case. Evangeline and the sheriff’s office ask too many questions, and Evangeline soon wears out her welcome. Voodoo curses aside, Ben’s job is at stake, and no one associated with the case is safe until the killer is found.
Book 5 in the Mae December Mystery series, which began with One Dog Too Many

Lia Farrell is the nom de plume for a mother/daughter duo of writers. Mom Lyn Farquhar and Daughter Lisa Fitzsimmons have been collaborating on the Mae December mystery series for four years.

ABOUT LYN
Lyn Farquhar taught herself to read before starting school and honed her story telling abilities by reading to her little sister. Ultimately, her mother ended the reading sessions because Lyn’s sister decided she preferred being read to over learning to read herself. She fell in love with library books at the age of six when a Bookmobile came to her one-room rural elementary school. The day the Bookmobile arrived, Lyn decided she would rather live in the bookmobile than at home and was only ousted following sustained efforts by her teacher and the bookmobile driver.
Lyn graduated from Okemos High School in Michigan and got her college and graduate degrees from Michigan State University. She has a master’s degree in English literature and a Ph.D. in Education, but has always maintained that she remained a student for such a long time only because it gave her an excuse to read. Lyn holds the rank of Professor of Medical Education at Michigan State University and has authored many journal articles, abstracts and research grants. Since her retirement from MSU to become a full time writer, she has completed a Young Adult Fantasy trilogy called Tales of the Skygrass Kingdom. Volume I from the trilogy is entitled Journey to Maidenstone and is available on amazon.com. Lyn has two daughters and six step children, nine granddaughters and three grandsons. She also has two extremely spoiled Welsh Corgi’s. Her hobby is interior design and she claims she has the equivalent of a master’s degree from watching way too many decorating shows.
ABOUT LISA

Lisa Fitzsimmons grew up in Michigan and was always encouraged to read, write and express herself artistically. She was read aloud to frequently. Throughout her childhood and teenage years, she was seldom seen without a book in hand. After becoming a mom at a young age, she attended Michigan State University in a tri-emphasis program with concentrations in Fine Art, Art History an Interior Design.
Lisa, with her husband and their two children, moved to North Carolina for three exciting years and then on to Tennessee, which she now calls home. She has enjoyed an eighteen year career as a Muralist and Interior Designer in middle Tennessee, but has always been interested in writing. Almost five years ago, Lisa and her mom, Lyn, began working on a writing project inspired by local events. The Mae December Mystery series was born.
Lisa, her husband and their three dogs currently divide their time between beautiful Northern Michigan in the summertime and middle Tennessee the rest of the year. She and her husband feel very blessed that their “empty nest” in Tennessee is just a short distance from their oldest, who has a beautiful family of her own. Their youngest child has settled in Northern Michigan, close to their cabin there. Life is good.
Author Links:
Webpage – http://www.liafarrell.net/
Blog – http://www.liafarrell.net/blog
GoodReads – https://www.goodreads.com/author/show/7353429.Lia_Farrell
Facebook – https://www.facebook.com/liafarrellauthor/
Subscribe to Newsletter- http://www.liafarrell.net/newsletter.html
Purchase Links

The book is a delight to read and I loved reading about the customs in the small villiage where the  setting for the book is. I'm not familiar with voodoo except it always made me uncomfortable. There are certain beliefs they go by and seem a bit secretive . The author does an amazing job of giving readers details of what Voodoo is. It is a very old religion that is a way of life for some and their customs may make some people uncomfortable. They do honor their dead in a beautiful ceremony and the details were very intriguing.   The book is well written and starts off with the mysterious death of a young woman. The decision to take in the mother dog and  pups were heartwarming.I did sense that perhaps the dog knew her master was gone and felt a little down. The description of the dogs  were so vivid I could picture them with their beautiful color and regal appearance.

Who is the young woman that has been found dead? The story is very intense  and I loved the characters in the book. There are several suspects and lots of unanswered questions that keeps the story moving at a good pace. With an election getting close, Sheriff Ben  Bradley needs to solve the case. Is the election somehow connected to the death that us being investigated? Strange signs pop up at Dory's home that warn her to stop investigating. Will Dory heed the warning, or continue to snoop around for answers?

Mae December  is the sheriff's fiancé and I thought the author really made her a strong character. She sure does  like to "help" with investigations. There are several characters in the book that are connected to the murder in some way and I really liked how the author made each one a strong possible suspect. There are many secrets throughout the book and the Voodoo Village is becoming quite a mysterious little place. The story weaves through several mysterious deaths and comes to an exciting end. I will be checking out the other books in this series, because the author really knows how to keep a story moving with very interesting characters .

I received a complimentary copy of this book from Great Escapes Book Tour. The review is my own opinion and I was not compensated for it.